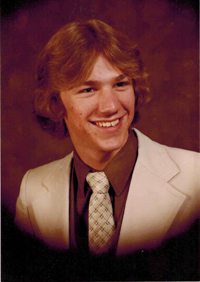 We are saddened to announce the sudden death of Lane Eric Hamblin. He died November 28, 2016 of heart complications at St. David's hospital in Austin, Texas. Lane was born in Boulder City, Nevada on June 29, 1965. In 1973 the family moved to Saudi Arabia where Lane attended 3rd & 4th grades in Dhahran and 4th & 5th grades in Abqaiq. In 1976 the family transferred to ASC in Houston where Lane attended school in the Cy-Fair School District. When the family returned to Saudi, Lane attended St. Stephens Academe of Austin, Texas and graduated from Villa Oasis School of Casa Grande, Arizona. The accompanying picture is from his high school graduation. Lane attended UT Austin and had a career in the wholesale grocery business. Lane is survived by and will be missed by his daughter Sasha, sisters Michelle and Andrea, and parents Terry and Carol Hamblin.