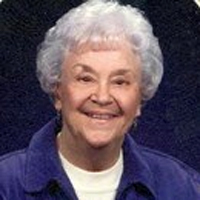 Marie (Sissy) Patton Thacker, age 93, passed away from this world to her Heavenly home on Monday, October 23, 2017 at Jamestown Assisted Living in Kingston, TN. Sissy lived a long and full life.

The youngest child of Myrtle and Gene Patton, Sissy was blessed to be a member of one of Kingston's prominent families. The Patton family owned the peach orchards that eventually became the site for the current TVA Kingston Fossil Fuel Plant. Sissy's father, Gene, and her uncle, Ernest, owned Patton Hardware in downtown Kingston for many years.

From 1980-1985, Sissy and her husband, Jim Thacker, lived in Saudia Arabia where Jim ran a power plant for Aramco Oil Company. During these years, she had the opportunity to travel to many exotic places around the world.

Sissy was a long-time member of the Church of Christ in Kingston, and over the last five years, she has resided at Jamestown Assisted Living, where the nurses and staff have given her a wonderful home.

In lieu of flowers, a donation may be made to The American Cancer Society in honor of Sissy's precious husband Jim. Kyker Funeral Home of Kingston in charge of arrangements.