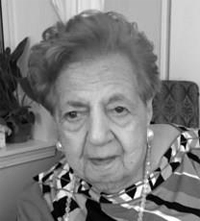 Mary was born in Lawrence, MA to immigrant Lebanese parents, Assad and Mary Coury. Following high school graduation, she joined the Navy and proudly served her country for three years during World War II. After her discharge, she attended American University in Beirut, Lebanon, graduating in 1954 with a BA degree in Pre-Law and Middle East History. Her career and life adventures then began when she met her husband, Benjamin Adams, Jr. en route to her first civilian employment in Dhahran, Saudi Arabia with Aramco, a worldwide energy company. They resided in Saudi for thirty years traveling the world on all vacations and holidays. Upon retirement, they relocated to Arlington, VA where they were active members of the St Thomas More Cathedral parish. Mary enjoyed being a choir member for 25 years and her most cherished memory was singing with the St Thomas More choir in 2001 for Pope John Paul II at the Vatican.

She was preceded in death by her husband of 56 years, Ben, in 2008 and her daughter Diana in 1958. She is survived by her brother Alphonse Coury, her nieces Sheryl Coury and Mary Wesela and numerous other nieces, nephews and cousins.

A Mass of Christian Burial will be said on December 29, 2017 at 10:00am at St Thomas More Cathedral, Arlington, VA with interment to follow at Columbia Gardens Cemetery, Arlington Boulevard, Arlington, VA.

In lieu of flowers donations may be made to St Jude Children's Research Hospital, Memphis, TN.