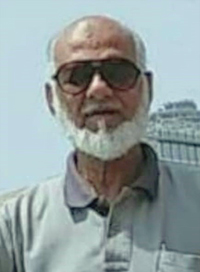 His mourners include Wife, a Son, a Daughter and four grandchildren; besides a lot of friends both in the country and abroad. Born on June 6, 1948, completed his education in Karachi and worked for State Life Insurance Company, before joining Saudi Aramco in August, 1974.

After a stint in the Steno Pool, he was permanently assigned to Office Services Department. Wajih spent his entire career (with Saudi Aramco) that spanned over 11 years with the same department before calling it quits sometime in mid-1985 and returned to his family in Pakistan.

During his employment with Saudi Aramco, Wajih was known for his distinct smiley face, enviable sense of humor, friendly nature and a person always ready to help.

Because the dwelling of most eastern expatriate employees was in the Almunirah Camp, it was only natural that Wajih became part of a group of young Pakistani's, most of whom had joined Saudi Aramco around the same time Wajih had.

Wajih also had a passion for Scrabble, thus was an active member of the Almunirah/Dhahran Scrabble group.