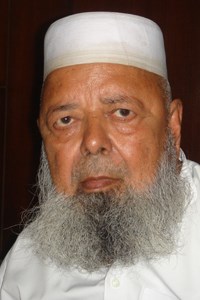 Former Aramcon Mr. Muhammad Asghar Fazli passed away on September 25, 2011 in Karachi, Pakistan. Mr. Fazli was born on October 14, 1932 in State Kapur Thala East Punjab India and migrated to Pakistan along with his parents in 1947.

Mr. Mohammad Asghar Fazli joined Aramco in 1955 and started his career from Abqaiq. He stayed in Abqaiq and stayed there for thirteen years later he was transferred to Dhahran and remain there until his early retirement in 1983. He worked for Aramco for twenty eight years. News of his retirement was published in the Arabian Sun: Muhammad Asghar Fazli Retires After 28 Years of Aramco Service.

He survived by three sons and one daughter. The details for his children is as follows:

Correspondence may kindly be forwarded to: Engr Fouad Muhammad Asghar, E-9/2, Block No.-4, Gulshan-e-Iqbal, Karachi-75300 Pakistan. You can also write to [email protected] or [email protected].