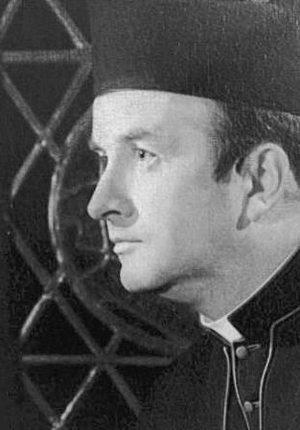 HALLOWELL - Roger Stilman Smith died Sunday April 7, at 7:30 a. m. in his home at Granite Hill Estates in Hallowell. His beloved wife, Edna, and their daughters Elizabeth and Cynthia, were by his side. He was 90 years of age. Roger was born Nov. 30, 1928, in Norwood, Mass., the son of Edward and Gladys Smith. He attended Colgate University, graduated in June 1950, and became engaged to Edna Newell, with whom he spent the rest of his life. Roger attended Berkley Divinity School in New Haven, Conn., graduating in 1953.

Roger and Edna were married on June 6, 1953, shortly before he was ordained Deacon and he began his ministry at the Church of the Good Shepherd in Rangely. Beth and Cindy were both born there. Roger was ordained to the Priesthood in 1954 and was called to minister to the congregation at St. Paul's Church in Fort Fairfield the following year.

In 1960, Roger was asked to serve as an Anglican Chaplain in the Arabian Gulf. During their annual leave the family traveled extensively both across Europe and around the world. Their trips through England included time spent at Coventry Cathedral, who's post-war ministry was dedicated to reconciliation not only with Germany but with the whole world. Roger was captivated by this; his ministry was forever changed. He was installed as a Companion in the Cathedral's Order of the Cross of Nails in 1975, joining such distinguished members as Archbishop Desmond Tutu of South Africa and the current Archbishop of Canterbury, Justin Welby.

Roger was called back to Maine in 1965 to serve as Rector of St. Mark's Church in Augusta. During his 12 years there, Roger was a pioneer in forging links between Augusta's many churches. One fruit of this work was the development of Augusta Regional Church Housing, whose ARCH-Beta development on Capitol Street won awards for its subsidized housing for the elderly and disabled. His work on the Commission of Ministry for the Episcopal Diocese also earned him the title of Canon Theologian.

Roger left St. Mark's in 1977 to support his wife's career: Edna had been promoted to District Manager for the Central Maine Power Company, the first woman to crack that ceiling. They moved to Wiscasset, where he entered into a new chapter of his ministry. While serving on the staff at St. Luke's Cathedral in Portland he developed a private practice for pastoral counseling and began work on his doctorate. He completed his graduate work at Hartford Seminary and was awarded the Doctor of Ministry in 1985. Further promotion at CMP for Edna brought them back to the Augusta area in 1979; they settled in Manchester.

For the next several decades Roger worked around the diocese serving as Interim Minister to several congregations including Lisbon Falls, Biddeford, Saco, and Old Town, and Priest-in-Charge of St. Andrew's in Readfield, serving that congregation well into the twenty-first century. Edna retired in 1991, Roger tried to, but was called to serve the Church of St. James the Less in Scarsdale, N.Y. as Interim Rector for one year. Upon their return to Maine, he resumed another aspect of his ministry, outreach to and reconciliation with Maine's indigenous tribes. He served as chair of the 1996-97 Task Force on Tribal-State Relations. Both Edna and he moved to Granite Hill Estates in Hallowell in October of 2012.

Roger is survived by Edna Smith, his wife of over 65 years, his sister, Florence Chmielorz of Westwood, Mass. ; daughters Elizabeth Eddy of South Portland and Cynthia Thom of Hopewell, N. J.; five grandchildren; and seven great-grandchildren. All are welcome at Roger's funeral service, which will be held at 11 a. m. on Friday, April 26 at St. Lukes's Cathedral in Portland. In lieu of flowers, contributions may be given to our local food banks and/or The Episcopal Relief and Development Fund.