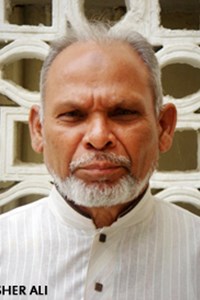 We pray that ALMIGHTY ALLAH rest his soul in eternal peace and shower His Blessing on him and blesses him with the highest place in Jannt-ul-Firdous, Ameen!

He was one of the Founder Member of Saudi Aramco Ex-Employees Association (SAEEA) and was the first Treasure of the association. Further he was the President of Anjuman Etahadmul Muslemeen Partabgarh Awadh, Karachi. He was running a charitable hospital under the banner of the association.

The Saudi Aramco Ex-Employees who attended the funeral are as follows:

Office bearers of SAEEA request all the Members to remember Mr. Sher Ali in their prayers.