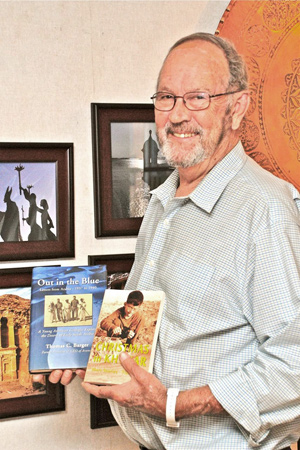 Timothy James Barger, writer, publisher, and raconteur died peacefully in his sleep on February 15th at his home in Vista, California, following a protracted illness with cancer.

Born September 18, 1947, Tim was the seventh child to be delivered at the Aramco hospital in Dhahran, Saudi Arabia. His father, Tom Barger, left a mining engineering professorship at the University of North Dakota, to search for oil in the vast and harsh Empty Quarter of Arabia in the years leading up to World War II, later becoming CEO of Aramco. Kathleen Ray Barger, his mother, also from North Dakota, was an expert horsewoman known for her dedicated fundraising for Middle Eastern refugees. The third of six children, Tim led a childhood filled with mischief and discovery as he explored the back alleys and yards of Dhahran and the desert beyond its fences. He chronicled his adventures, from unwittingly locking himself in a mini-refrigerator to launching a flaming model ship as a Viking pyre in the Persian Gulf, in two books, “Arabian Son” and “Christmas in Khobar.”

After graduating from Campion School in Wisconsin, Tim attended Santa Clara University, where he met his first wife, Janet Macdonald of Bakersfield. A history major, Tim experimented with the newly emerging art of videography, which he later pursued as a career in Arabia, first at King Faisal Specialist Hospital in Riyadh and then in Jeddah, where he established an electronics equipment firm. Returning to settle in Vista, Tim started a company that produced technical films as he and Janet raised their three young children.

In the wake of Janet’s untimely death in 1982, Tim began organizing his father’s many papers, photos, and films dating back to his explorations of the Arabian Peninsula in the 1930s. Out of this project, Tim published “Out in the Blue: Letters from Arabia 1937-1940,” a compilation of Tom Barger’s letters to his young bride he had left behind in North Dakota that is frequently cited in academic works of mid-century Saudi history.

“Out in the Blue” was the first publication of Selwa Press, co-founded by Tim with his wife, Sydney Fate Barger, also of Dhahran. A loving mother to his children, Sydney shared many happy experiences and travels with Tim before her death in 2002. Tim continued to run Selwa Press, publishing over a dozen works, including “Arabian Knight” by Thomas Lippman, an award-winning biography of Col. Bill Eddy, the diplomat and spy who paved the way for the Allied landing in North Africa. A frequent contributor to the Aramco Expats website, Tim regaled several generations of Aramcons with stories of his childhood exploits later memorialized in his books.

Tim was beloved by his four sisters and brother, his three children and three grandchildren, as well as by a host of nieces and nephews and his wide circle of devoted and loyal friends. A lover of history and intellectually curious to the end, Tim had a gift for making insightful connections between disparate ideas, delivered always with his trademark ironic humor. He shall be greatly missed.

Tim is survived by his daughter, Khamisah Barger; her children Beatrice, Theo, and Jack Lundell; his sons, Luke Barger and Sam Barger; his sisters Annie Hebert, Mary Barger, Norah Barger, and Teresa Barger; and his brother, Michael Barger. His funeral service will be held February 24th at Eternal Hills Mortuary in Oceanside, CA at 10 a.m., followed by burial at noon at the Masonic Cemetery in Fallbrook and a reception at his home in Vista. In lieu of flowers, the family suggests donations to Doctors Without Borders http://www.doctorswithoutborders.org/.