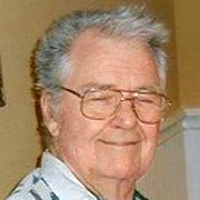 Warren E. Ring a resident Kingston Residence of Vermilion, passed away on Thursday, September 21, 2017 at the age of 93.

Warren was born on July 9, 1924 in Jersey City, NJ. He was pre-deceased by his parents Warren and Flora (nee Johnson) Ring, a brother Eric, and his wife of 57 years, Alice (nee Threlfall) Ring.

Warren was a World War II veteran and a Purple Heart recipient, serving in the United States Army. A 1948 graduate of Steven's Institute of Technology, Warren worked as an Automotive Engineer in the oil industry for Cities Services (in Lake Charles, LA), Texaco (in northern NJ, Towson, MD and Cherry Hill, NJ) and Aramco. He lived and worked in Dhahran, Saudi Arabia, for 15 years where he designed and maintained trucks with tires large enough to drive in the desert. After retiring, Warren and Alice lived in Naples, FL and New Bern, NC. He was an active Rotarian and member of the Lutheran churches in all these US locations.

Warren will be interred in a family plot in George Washington Memorial Park, Paramus, NJ. His nieces and nephews will hold a memorial service at a later date.