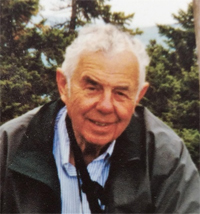 Warren Woodbury Mitchell, 92, died surrounded by loving family on February 21, 2019 in Kennebunk, Maine, of advanced age and the ravages of dementia. He was born on August 23, 1926 in Peking, China, the son of Myron Atwood Mitchell and Florence Colby Mitchell, while his father was working for Standard Oil Company of New York in China.

When he was 12 years old, Warren and his mother were repatriated to the United States with other dependents of foreign workers due to the threat of the Second Sino-Japanese War. His father continued to work in China, and after the outbreak of World War Two, he was taken into custody by Japanese officials in Manila, Philippines and interned at the Santo Tomas Internment Camp in Manila for two years.

Having begun his education at the Shanghai American School in Tientsin, China, Warren attended The Lawrenceville School in Lawrenceville, New Jersey. Upon graduation from Lawrenceville, he enrolled at Yale University, graduating with a Bachelor of Engineering degree and a naval commission in 1947.

He was hired by the Engineering Department of Standard Oil Company of California (now Chevron Corporation) in 1947. Over a four-decade career there (except for a three-year hiatus while on loan to Aramco Overseas Company in The Hague, The Netherlands), he performed and supervised designs of petroleum industry facilities and managed projects, mostly related to civil engineering. He retired as Senior Supervising Engineer.

A Tau Beta Pi Engineering Honor Society and Sigma Xi Scientific Research Honor Society conferee, Warren held Professional Engineer licenses in Texas, Hawaii, New Jersey, and the Canadian Provinces of British Columbia and Alberta. He was a Registered Civil Engineer in California and Louisiana, and a Registered Structural Engineer in California. A Life Member of the American Society of Civil Engineers and the Structural Engineers Association of Northern California, and a member of the Earthquake Engineering Research Institute, he chaired the American Petroleum Institute Work Group on Earthquake Criteria for Fixed Offshore Production Platforms.

Warren purchased a cottage on aptly-named Pleasant Pond in Caratunk, Maine, following his retirement. He thoroughly enjoyed spending time at “P Pond” with friends and family. In 2007 he and wife Joanne purchased a home in The Villages in Florida, learned to play golf, and made new and lasting friends.

He was predeceased by his first wife, Lorraine Anderson Mitchell.

His family, who treasure the fact that this gentle and generous man enriched their lives, will hold a memorial service for Warren at The Forks West Forks Congregational Church, UCC in West Forks, Maine at a date yet to be determined.

In lieu of flowers, donations may be made in Warren’s memory to the Pleasant Pond Protective Association, P.O. Box 36, Caratunk, ME 04925.