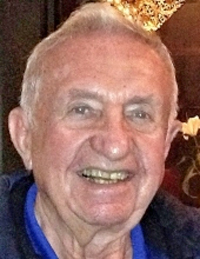 Capt. William J. “Bill” Mulcahy USN (Ret.), 86, of Hot Springs Village, AR passed away on March 29, 2018. He was a proud Vietnam War veteran who served his country with distinction for twenty-two years in active service and, in retirement, was devoted to veteran affairs.

He was born to William and Anna Bidese Mulcahy on July 26, 1931 in Chicago, IL. In 1953, he joined the Navy and began a distinguished and decorated career that included, among others, stints as Commander of Helicopter Squadron 3, Operations Officer of the USS Iwo Jima, and the Executive Officer of Helicopter Attack (Light) Squadron 3, the Seawolves. He retired with full honors in 1975.

Bill flew helicopters for Petroleum Helicopters in the Gulf of Mexico until 1979, when he moved to Saudi Arabia to fly for Arabian Helicopters. He joined ARAMCO in 1986, became Helicopter Safety Pilot and was appointed Training Supervisor until his retirement in 1993.

A resident of Hot Springs Village, Bill joined and was active in the Military Officers Association of America, the American Legion, and the Veterans of Foreign Wars.

A Memorial Service will be held at 2:00 p.m. on June 11, 2018 at the Unitarian Universalist Village Church in Hot Springs Village, AR.