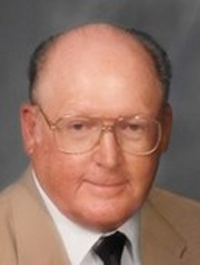 Kenneth Gale Miller passed away peacefully on February 9, 2018 at the age of 90. He lived a rich, full, globe-spanning life, and his generous and witty spirit will forever be treasured by his family and all those fortunate to have known him.

Ken was born in Flint, MI to Clarence and Ida Mae Miller, and grew up alongside nearby Lake Fenton. He graduated in 1945 from Fenton High School and, after serving in the Army Air Corps, earned a degree in engineering in 1951 from Michigan State University, where he was a member of the Tau Beta Pi honor society.

In 1953, while working as a chemical engineer in New York City for the Arabian American Oil Company (Aramco), he married Marguerite ("Marge") Gloria Bell. Shortly thereafter, they moved to Holland and, eight years later, moved to Saudi Arabia. In 1966, when Ken decided to retire from Aramco and return back to the USA, he moved his family to Walnut Creek, CA and began working for Bechtel in San Francisco. He continued to enjoy traveling and, in his spare time, mentored young non-English-speaking students and drove the Walnut Creek Senior Citizens bus. He also founded the Walnut Creek Seniors bicycling club, "Folks on Spokes", was a member of SIRS and Rotary, and was very active with his church, St. John Vianney.

Ken will be lovingly remembered by his daughter, Patricia and son-in-law, Robert Berthold; his son, Michael; his son, Robert and daughter-in-law, Mariko; his son, James and daughter-in-law, Suzanne; his grandchildren, Kristopher, Ryan, Scott, Daniel and Benjamin, as well as numerous nieces and nephews. He was predeceased by his beloved wife, Marge, who passed away in 2003; his sisters, Elaine and Janet; and his brothers, Claremont and Jack.

Ken will also be greatly missed by his very dear friend, Katie Seitz—they were constant companions over the past 14 years, traveling the world and sharing many happy times together.

We would like to thank the doctors and family members who have been so supportive of Ken over the past year, as well as the wonderful people at Guided HealthCare, Hillendale Home Care, Hospice East Bay and the Bruns House. Contributions in memory of Ken may be made to Hospice East Bay.

A memorial Mass will be held at 10:30 AM, Tuesday, Feb. 27, at St. John Vianney Catholic Church in Walnut Creek, followed by a burial at Queen of Heaven Cemetery in Lafayette, CA.