Brickwork in the Land of Palms 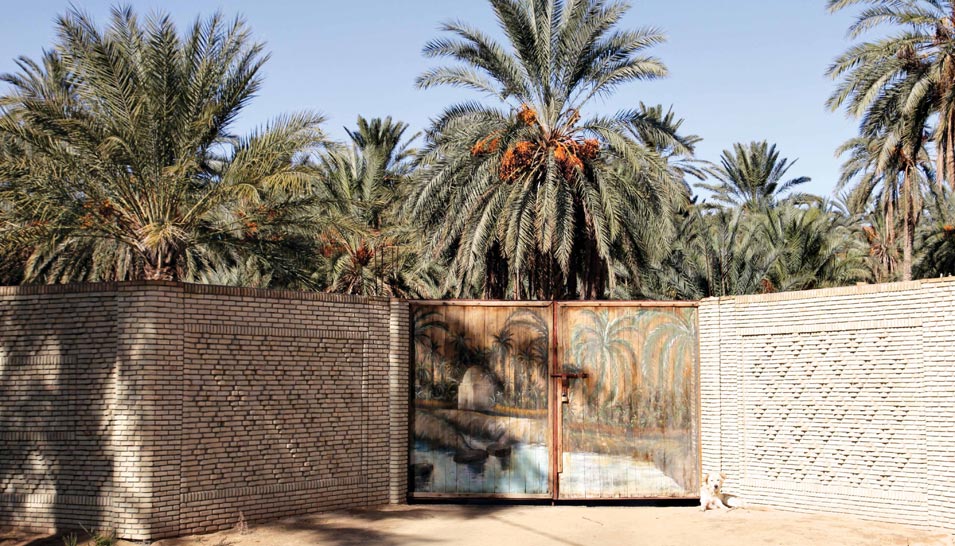 Sunlight and shadows highlight a brick-patterned facade in the Ouled el-Hadef quarter of Tozeur, a city of about 50,000 in southwest Tunisia. Laid horizontally and vertically, some protruding and some recessed, the handmade, kiln-fired bricks are staggered into shapes that recall textiles and other traditional patterns and scenes. The results are motifs that are both mesmerizing and useful: The fractional shadow cast by each sunlit brick helps cool the wall. 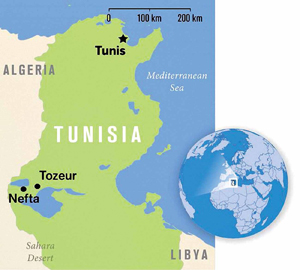 The narrow lane passes under a vaulted passageway and emerges back into the bright sunshine as it winds through Tozeur’s Ouled el-Hadef quarter. The houses in this centuries- old neighborhood open privately onto interior courtyards, offering the narrow streets only tall exterior walls with high, slitted windows and stout doors made of palm wood. The walls, though, are not smooth and whitewashed, as in much of the country. Protruding and receding bricks form intricate geometrical patterns around windows, above doors and on many of the walls, creating contrasts of light and shadows.

Standing at a distance from a smattering of earthen, brick mosaics in this southern Tunisian city, the walls come alive in patterns, dancing and shape-shifting in the light of midday. In the fore, the small bricks appear bland, yellowish-green, and unadorned. But one only needs to move back a few steps and put distance between their eyes and the 15th century Berber edifices to relish the complexity of the intricate masonry emerging from the walls. 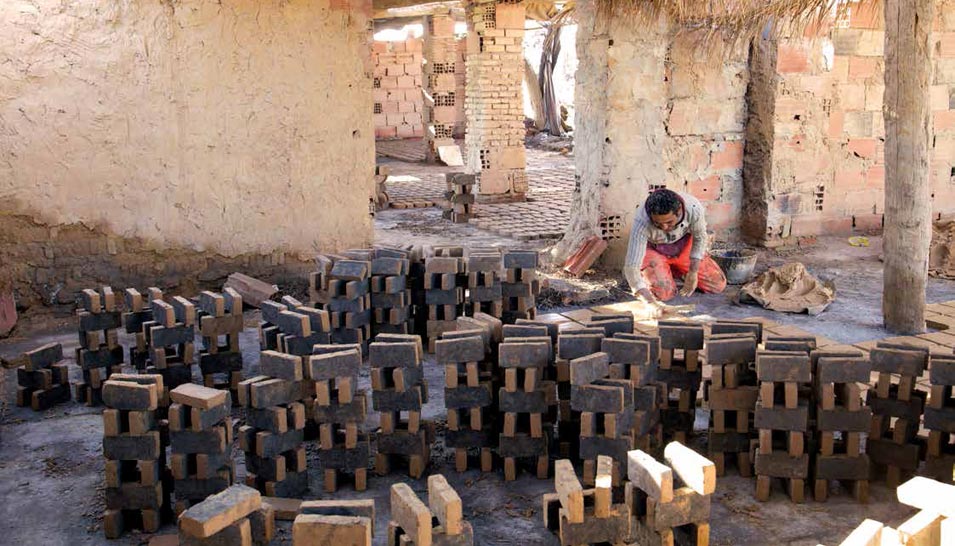 Surrounded by stacks of drying bricks, eighth-generation Tozeur brickmaker Antar Chorba pushes a wet mix of clay into block form as many as 600 times in a day. The bricks dry in stacks that will later be fired.

Amid the Sahara, Tozeur’s famed brick mosaics are as celebrated as the town’s safari excursions, sunset camel rides and guided tours to the nearby Star Wars sets of Tatooine, the fictional original home of the movie’s hero, Luke Skywalker. But the bricks, arranged in their many unique geometric patterns — they delight the residents and tourists alike. 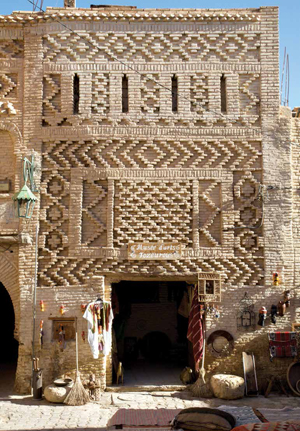 Sunlight and shadows highlight a brickpatterned facade in the Ouled el-Hadef quarter of Tozeur, a city of about 50,000 in southwest Tunisia. Laid horizontally and vertically, some protruding and some recessed, the handmade, kiln-fired bricks are staggered into shapes that recall textiles and other traditional patterns and scenes. The results are motifs that are both mesmerizing and useful: The fractional shadow cast by each sunlit brick helps cool the wall.

Motioning to a row of inverted “Vs” situated across the top of an archway in the mosaic, he says, “This is a camel train.” He then points out stylized palm trees and a zigzagging snake design.

“We represent what is around us.”

Only a small number of brick artisans remain, keeping alive a tradition of brickmaking that hasn’t changed much through the centuries. Chorfi has seen the local artisans using the same method of brick creation and design as the town’s Berber predecessors did, including setting afire the abundance of fronds from the local date palm orchards, which are used to fuel the brickmaking ovens.

Tozeur became prosperous through its plenty of dates, even referenced by 11th century Andalusian historian and geographer al-Bakri, who wrote: “There is no other place in Ifrikiya that produces so many dates; almost every day a thousand camels, or even more, are loaded with this fruit.”

Today the date orchards of Tozeur, or palmeraie, spread some 15 square kilometers and contain 400,000 palms, famous for their amber-colored, near-translucent dates, or deglet nour. The region is known as the “Land of the Palms,” or in Arabic, Bled el-Djerid. Without the numerous palms, the brick ovens could not burn — the bricks could not be.

Antar Chorba, an eighth-generation Tozeur brickmaker, is from one of the families in the region that continues the tradition of the early brick masons. Chorba explains that structures erected in the Djerid, or southwest region of Tunisia, in the early days were originally made of sun-dried bricks, molded of mud and straw, and in Arabic called fankar. 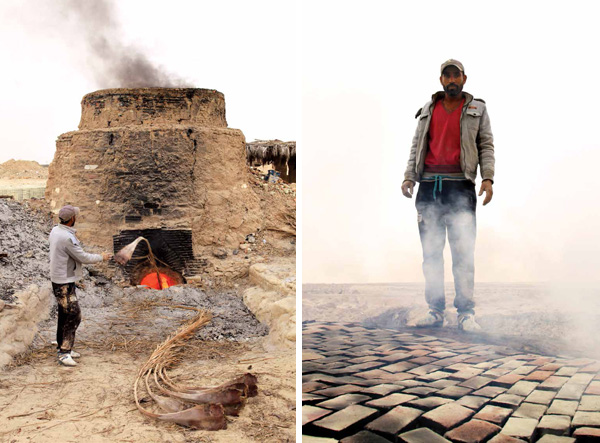 One of Tozeur’s brickmakers uses fronds cut from the palmeraie as fuel. It takes around 6,000 of them to keep a kiln going for the 24 hours a load of 10,000 to 20,000 bricks requires. Afterward, the bricks cool for three or four days.

The clay was dry enough to be cut into blocks, he says, but was vulnerable to the powerful rainstorms that often swept the area. The fankar also tended to erode from wind and sandstorms and the intense heat of the Saharan sun. Soon locals began experimenting with firing the clay in handmade kilns, which over time the masons observed improved durability.

Working quickly, Chorba can form over 600 bricks a day. With the paste ready, he scatters ash from the kiln across a patch of courtyard. This prevents sticking and absorbs moisture. He then sets a simple bottomless wooden mold on the ground and works a handful of clay into one of the rectangular holes until there are no air bubbles. He then repeats the process to form more bricks. After filling a section of the courtyard he’s working on, he generously tosses more ash over the top of the freshly molded bricks. Along with blotting up excess moisture, the protective layer of ash stops cracks from forming on the surface of the bricks as they dry.

Brickmaking in Tozeur begins with a mix of clay and sandy soil that soaks for some 12 hours before being pressed into a rectangular mold. The ground below and the tops of the damp bricks are sprinkled with ash to absorb moisture, drying in the open air for hours to days depending on the weather. In the kiln the bricks are baked at almost 1,000 degrees Celsius.

While Chorba molds bricks, an assistant patiently scrapes with a knife each of the six sides of the bricks, which were formed a few days before, to remove the ash and give them their final shape. Then, the bricks are stacked in harsai, pillars of 10 or 12, allowing for ventilation as the bricks dry. This method also helps the masons keep count of production. At the final stage, they are stored until there are enough to fill the oven, which can hold between 10,000 and 20,000 bricks.

The open-top, updraft kilns measure upward of 3 meters, with a narrow, door-like gap for loading bricks. The fuel pit is subterranean and directly beneath the oven, and between the two parts of the kiln is a wheel-like chamber floor known as a sieve, an eight- or nine-spoke platform supported by vaulted arches. Loading takes four or five workers a full day to complete.

Once the kiln has been filled, the loading gap is plugged with clay and the ovens set ablaze. 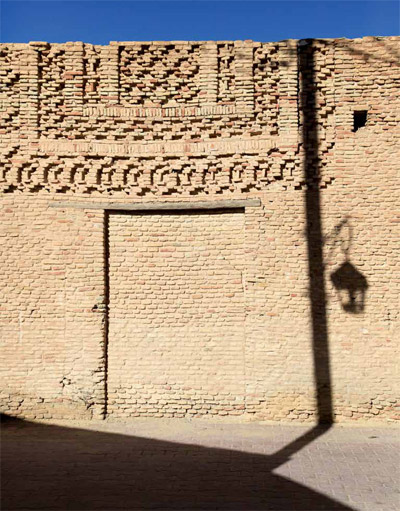 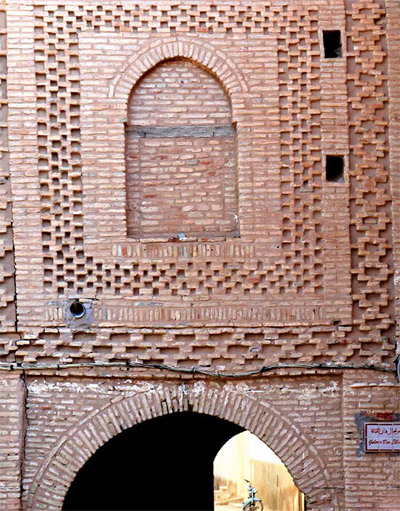 Here, a central arched window may have once been an opening in the wall, or the window may be a bricklayer’s design device. Tozeur’s

To fire a load of bricks, it takes around 6,000 fronds and 24 hours with temperatures inside the oven reaching nearly 1,000 degrees Celsius. It takes three to four days for the bricks to cool. Then the bricks are removed through the temporarily plugged loading door, which is broken open; each brick is then sorted.

Tozeur takes its name from the Latin Tusuros, bestowed by the Romans when they built a citadel fortress as part of their chain of fortified outposts meant to contain nomadic Berber populations, the original inhabitants of Tunisia. The city soon became a major trading post and important stopover for caravans traveling from the Sahara to the Tunisian coast, as well as those in transit to Makkah from the Maghrib region of Africa.

Thirty minutes’ drive west of Tozeur, near the Algerian border, sits the town of Nefta, population 25,000. Mekki Khnissi, whose family has been making bricks there for 300 years, says it was settlers from Kufa, Iraq, who brought the tradition a millennium ago. 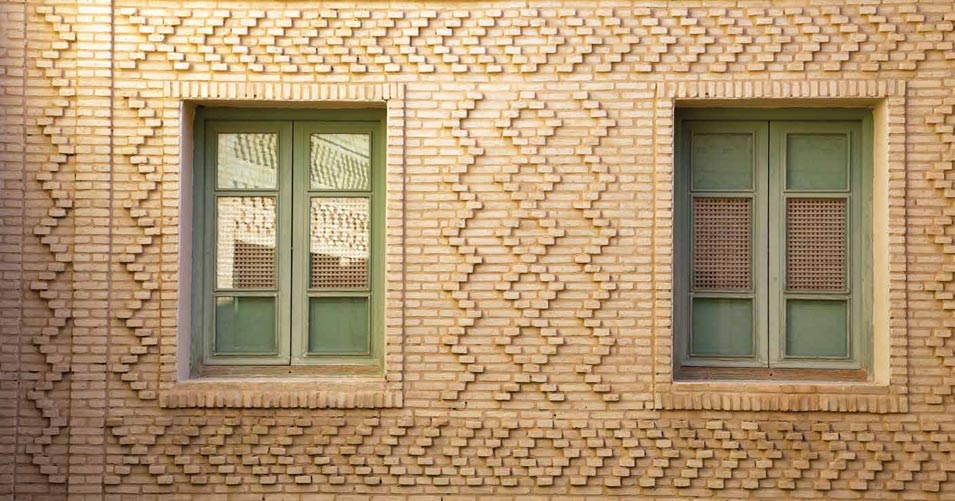 A hotel window is framed in brick designs.

Until some 30 years ago, brickmaker Khnissi says Nefta’s kilns were in the center of town. Tunisian officials moved them because of pollution, and the large weekly suq now gathers on the flat expanse where they once stood. Before then, there were 20 families making bricks.

“Now there is just two. No one wants to do it. It’s tough,” Khnissi says.

Yet, the tradition of artisanal masonry continues in Tozeur and Nefta. New houses are erected using the bricks, and an area luxury hotel ordered 1 million of the bricks to use in its recent construction. Brickmaking is a cherished gem for those who grew up in the region, and those visiting for the first time. So, while tourists may come to experience the desert and its many timeless offerings, the bricks underscore the history of two towns and centuries of residents who have cemented their identity in the patterned facades of their homes.