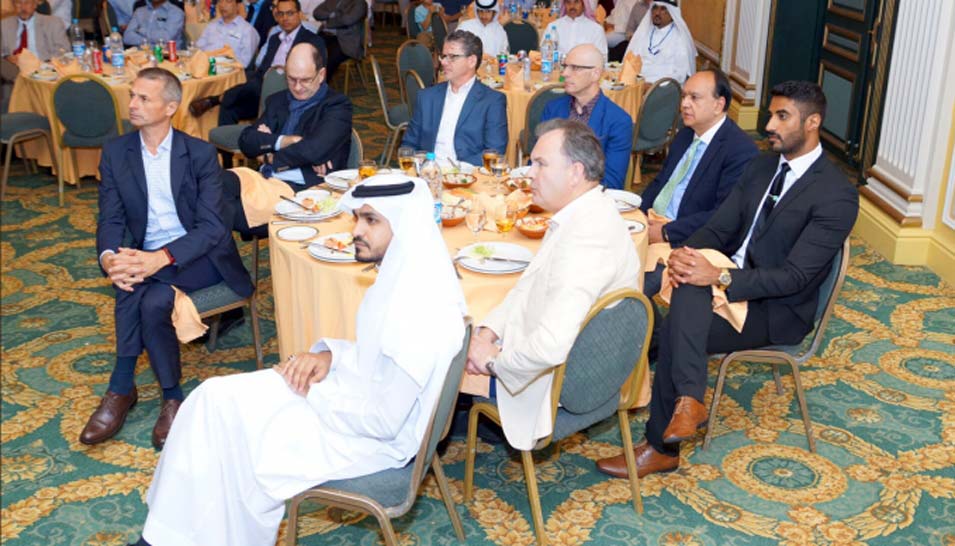 Saudi Aramco members of the American Institute of Chemical Engineers listen to an address by Warren Wilder.

The petrochemical sector and Saudi Aramco’s continued growth of its downstream business have the potential to play a pivotal role in the Kingdom’s 2030 Vision for a diversified and sustainable economic future, according to Saudi Aramco’s vice president of Chemicals.

Warren W. Wilder was addressing an audience of 200 at the technical dinner of the Saudi Arabia Section of the American Institute of Chemical Engineers (SAS-AIChe).

Wilder said that Saudi Aramco’s entry into chemicals and its ambitious strategic plan to become a fully integrated global petroleum and chemicals enterprise will leverage its capabilities and resources to create jobs and help diversify the Saudi economy beyond oil.

Wilder characterized Saudi Aramco’s approach to growth in the chemicals sector as being based on a two-pronged integration strategy — integration with refineries and other feedstock providers and integration, or closer ties, with customers.

Wilder pointed to the significant employment potential of a growing chemicals sector in the Kingdom.

“The sector directly employs 89,000 employees and provides indirect employment for at least three times as many, or about 267,000,” he said.

“Employment in this sector has been growing at a very healthy 9% per year over the past 10 years. And 79% of the employees are Saudis. In fact, the petrochemicals sector is the nongovernment sector of the economy with the highest percentage of Saudi employees.

“It is therefore not surprising that the petrochemicals sector was highlighted as an important vehicle for implementing the National Transformation Vision. The sector will play an increasingly important role in the future,” Wilder said.

Wilder went on to highlight that the Saudi petrochemicals industry has been designated as one of seven national industries selected for concentrated support. However, to maintain competitiveness and achieve its full potential, the industry must address “certain key challenges.”

“Most of the Kingdom’s petrochemicals presently being exported are commodities. These products, such as polyethylene, polypropylene, and MEG account for 98% of Saudi petrochemical production, compared to only 60% to 70% for Germany and the U.S.

Wilder concluded by stating his conviction that “Saudi Aramco Chemicals will be a powerful force for the future, helping to diversify the industry, attracting foreign and local investment into the Kingdom and facilitating the development of a knowledge economy.”