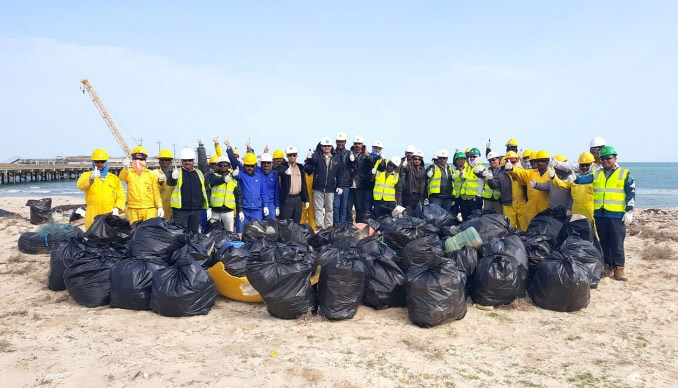 The Safaniyah shoreline was the venue for a recent Saudi Aramco coastal cleanup campaign, held under the theme “Together We Make Our Beach Better.”

The Safaniyah Offshore Producing Department (SOfPD), along with the Operation Projects Department (OPD), organized the cleanup, to remove coastal litter from the shoreline. Around 100 employees from Saudi Aramco participated in the event.

The cleanup involved clearing two kilometers of the coastal area on the Safaniyah seashore, with a goal of providing a clean and healthy local environment. SOfPD manager Khalid M. Al Khalb highlighted the importance of encouraging operations personnel and contractors to take joint responsibility in making sure that they live in clean and healthy communities, and to ensure that any waste dumped on the shore is removed immediately.

Waste is not only harmful to people in the community but it also contaminates the coastal environment and affects marine life such as crabs, fish nurseries and turtle habitats.

Al Khalb also discussed the merits of following good environmental practices at the shore and urged all employees to avoid leaving trash and waste that will affect and harm the natural ecosystem.

The campaign was a success, as was the awareness program designed to educate operations and contractors on coastal litter issues and to encourage positive changes to reduce litter and protect the quality of the Kingdom’s aquatic environments. Around three tons of garbage was collected from the shoreline.

The contractors were happy to participate in the campaign and showed great interest in participating in similar events that will benefit the surrounding communities.

Trash is one of the pollution problems facing the Kingdom’s coastal areas. “To help protect the ocean and coastal areas from pollution, coastal cleanup campaigns such as today’s, should be planned more often to heal the bay,” said SofPD supervisor Rashed Muatairi, who was among the participants of the campaign.

Zouhair Kaaki, an SofPD compliance supervisor who organizes such events every year, said the enthusiasm of the participants greatly helped with the success of the cleanup. “We had a big jump in participation, which we were really pleased to see,” said Kaaki. “Every year, we bring people from other organizations to the Safaniyah area to participate in these great events, and we want as many people as possible to be a part of our commitment to keep the environment clean.”