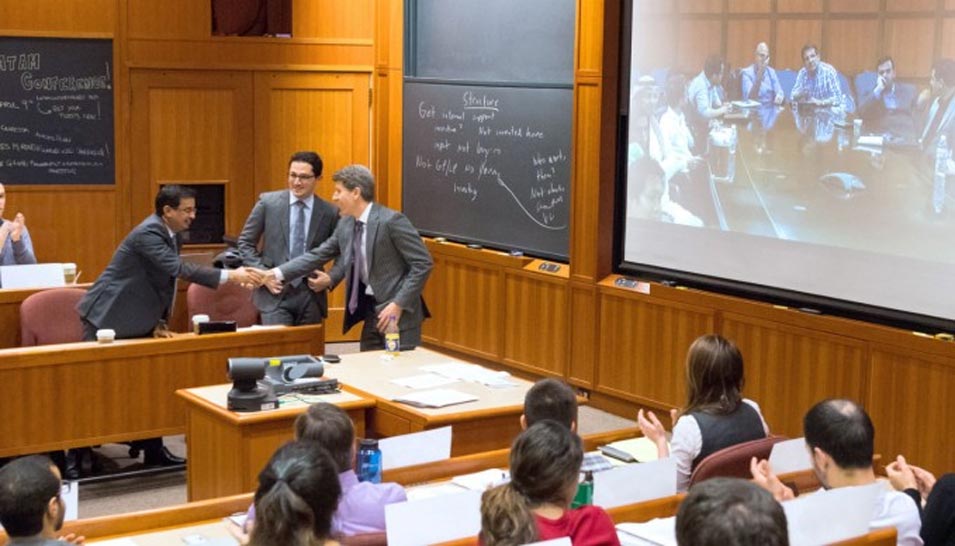 The HBS curriculum incorporates case study reviews on real-world business management decisions as a way for students to hone their critical-thinking skills.

“Saudi Aramco and Corporate Venture Capital” was the title of the case study spotlighted in the Venture Capital and Private Equity Class held in April with about 90 students in attendance.

The case study was prepared by HBS professors Joseph B. Fuller and Matthew Rhodes-Kropf, and research associate Nathaniel Burbank. HBS cases are developed solely as the basis for class discussion and are funded by the school.

The case examined the situational analysis that led to Saudi Aramco’s decision to create a corporate venture capital (CVC) fund to invest globally in early-stage and high-growth technology companies. The company’s goal was to find and invest in new technologies of strategic importance to the enterprise and the Kingdom.

To do that, SAEV was launched in 2012 as a wholly owned subsidiary to scout and recommend opportunities for the company to allocate investment dollars. It became a reality through the efforts of the Saudi Aramco NBD team, in collaboration with the chief technology officer’s office.

“We were delighted that Harvard Business School selected Saudi Aramco for one of its case studies,” Al-Ma’ashouq said. “This is a world premier business school, and its students are accomplished and keen to learn and engage. It was beneficial for us to hear their perspectives.”

“I’d like to thank the faculty and others for hosting our visit, and for allowing us to be a part of the educational process,” he added.

Al-Qahtani said the experience at HBS was rewarding, adding that he thoroughly enjoyed meeting the students. “I was impressed with the caliber of their analysis,” he said.

Mufti, who had a critical role in developing the CVC fund and the formation of SAEV, said he believed the team was able to “open a window” for the students to see the opportunities and challenges involved in structuring a venture capital program for a large corporation.

During their campus visit, Al-Qahtani and Mufti also served as guest speakers at chapter sessions of the HBS Energy and Environment Student Club and HBS Middle East and North Africa Student Club to further talk about Saudi Aramco and SAEV. Additionally, meetings were held with Saudi Aramco-sponsored students enrolled in the MBA program.

Professors Fuller and Rhodes-Kropf expressed their appreciation to the Saudi Aramco team members for their participation in the various educational venues.

Students both in the classroom and club meetings asked a variety of questions focused on the goals and challenges in forming a corporate venture capital group. Following are several of those questions, with combined responses given by Saif S. Al-Qahtani, director of SAEV, and Majid A. Mufti, head of Upstream Transaction, NBD.

Question: What’s more important to the mission of SAEV? Shareholder return on investments, or strategic value to Saudi Aramco?

Answer: “The strategic value is of primary interest. If use of a particular technology, for example, ends up directly saving our company even 1% in its upstream operations — that amounts to a huge positive impact on our bottom line.”

Question: “How does R&D and a corporate venture capital program — which also seeks new technologies — live together?”

Answer: “They definitely complement and support one another to advance the company’s leadership position in the technology sector. The capital ventures effort works as a multiplier, enabling us to expand into the external marketplace to see, learn, and adopt additional technologies that we may not have known about otherwise.”

Question: What about solar and other forms of energy?

Answer: “We see ourselves today as a truly diversified energy and chemicals company. Even though petroleum is still in demand as a primary energy source — and will probably remain so for quite a while — there may be a time beyond that where our customers need something else. We will continue to invest in the energy for the future. Solar is of particular interest to Saudi Aramco, since Saudi Arabia certainly has plenty of sun and a suitable terrain.”

Question: How can you successfully manage a CVC fund initiative in a large corporate environment, which typically has competing interests?

Answer: We developed our energy ventures group, SAEV, as a separate entity to help enhance the flow of business. Our Investment Committee, which makes the final investment decisions, is composed of those within the company who have a personal stake in adopting technologies that will help solve operational challenges in their respective areas. This creates a mindset geared toward success.”