Hats Off to the Ghutrah 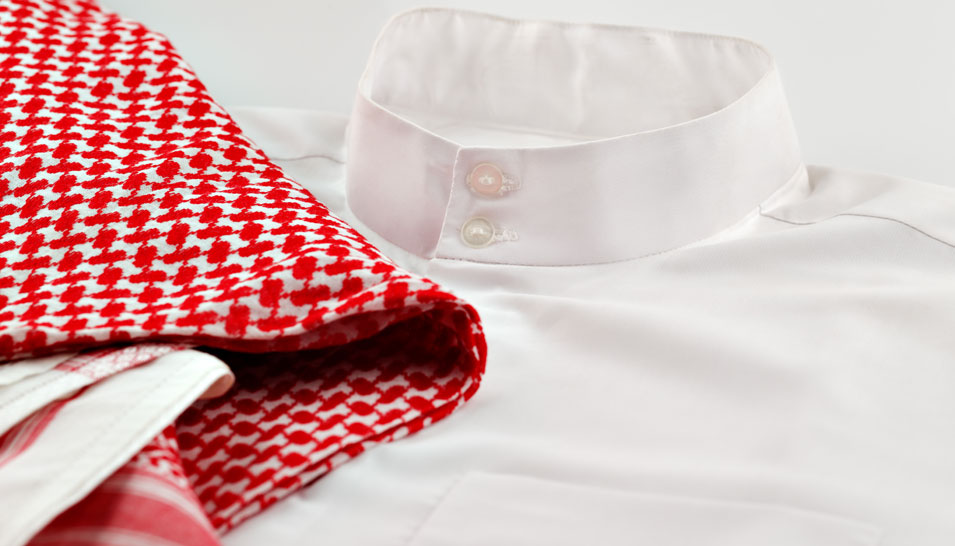 “Clothes make the man,” is an oft-heard expression that’s provided the title to numerous short stories from various authors from different countries around the world over the years. Based on the cultural history of Arabia, perhaps that declarative sentence should be modified to read: “Geography and climate make the clothes that make the man.” See if you agree after reading this story involving a well-known figure from the Peninsula’s history.

Colonel Thomas Edward Lawrence, commonly referred to in print as T. E. Lawrence and best known to the world as Lawrence of Arabia, authored one of the great literary works of the 20th Century—Seven Pillars of Wisdom: A Triumph—in which he recounts his adventures advising Arab forces in their revolt against Ottoman rule during the First World War. In one passage, he describes an incident that took place during a visit he made to Jeddah in the company of a fellow British officer:

“With Abd el Kader, in his picturesque rambling house looking over the deserted square, whence so many Medina caravans had started, I stayed four days waiting for the ship, which seemed as if it might fail me at the rendezvous. However, at last the Suva appeared, with Captain Boyle, who took me back to Jidda. It was my first meeting with Boyle. He had done much in the beginning of the revolt, and was to do much more for the future: but I failed to make a good return impression. I was travel-stained and had no baggage with me. Worst of all I wore a native head-cloth, put on as a compliment to the Arabs. Boyle disapproved."

“Our persistence in the hat (due to a misunderstanding of the ways of heat-stroke) had led the East to see significance in it, and after long thought their wisest brains concluded that Christians wore the hideous thing that its broad brim might interpose between their weak eyes and the uncongenial sight of God. So it reminded Islam continually that God was miscalled and misliked by Christians. The British thought this prejudice reprehensible, one to be corrected at any price. … Now as it happened I had been educated in Syria before the war to wear the entire Arab outfit when necessary without strangeness, or sense of being socially compromised. The skirts were a nuisance in running up stairs, but the head-cloth was even convenient in such a climate. So I had accepted it when I rode inland, and must now cling to it under fire of naval disapproval, till some shop should sell me a cap.”

Later in Pillars, Lawrence talks about an exchange he had with Emir Feisal I bin Hussein bin Ali al-Hashemi:

“Suddenly Feisal asked me if I would wear Arab clothes like his own while in the camp. I should find it better for my own part, since it was a comfortable dress in which to live Arab-fashion as we must do. Besides, the tribesmen would then understand how to take me. The only wearers of khaki in their experience had been Turkish officers, before whom they took up an instinctive defence. If I wore Meccan clothes, they would behave to me as though I were really one of the leaders; and I might slip in and out of Feisal’s tent without making a sensation which he had to explain away each time to strangers."

“I agreed at once, very gladly; for army uniform was abominable when camel-riding or when sitting about on the ground; and the Arab things, which I had learned to manage before the war, were cleaner and more decent in the desert. Hejris was pleased, too, and exercised his fancy in fitting me out in splendid white silk and gold-embroidered wedding garments which had been sent to Feisal lately (was it a hint?) by his great-aunt in Mecca. I took a stroll in the new looseness of them round the palm-gardens of Mubarak and Bruka, to accustom myself to their feel.”

Lawrence’s words touch on prominent issues at work today regarding differences in dress and differing attitudes toward them held by Arabs and westerners. 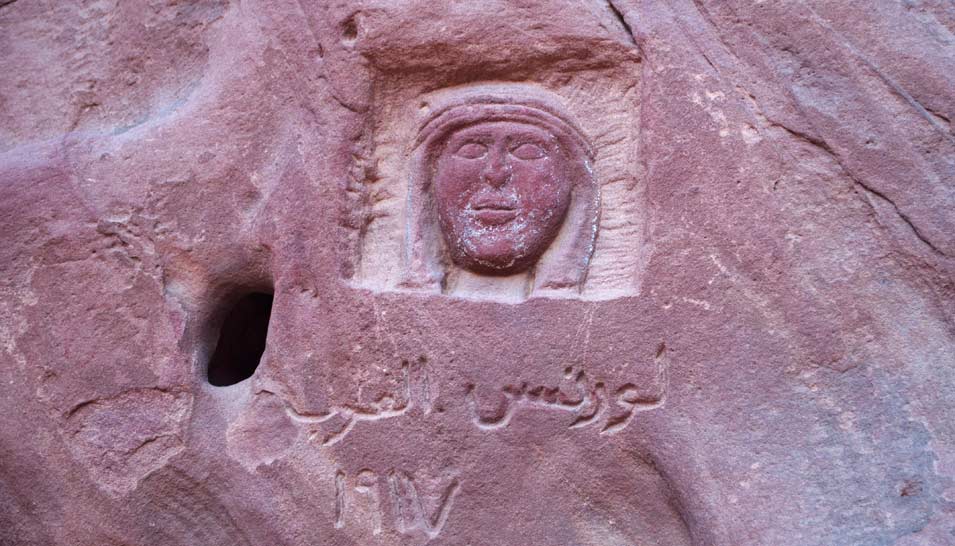 Carving and inscription on the rock commemorating Lawrence of Arabia, the British officer and archaeologist T. E. Lawrence, in the desert of Wadi Rum, known as Valley of the Moon.

The visual image many Americans have of westerners wearing Arab garb comes from scenes from David Lean’s Oscar-winning cinematic masterpiece, 1962’s Lawrence of Arabia, starring Peter O’Toole in the title role. The movie’s inaccuracies are legion, as Lean famously let his artistic license run wild. (Lawrence’s surviving brother A. W. Lawrence, who sold the movie rights to Sam Spiegel, reportedly said he couldn’t recognize his famous brother after viewing the movie.) The events that led to Lawrence’s donning of the white silk wedding garb described by him in Pillars are a perfect example. In the movie, Lean created a fictional composite character—Sherif Ali, played by Omar Sharif—for the movie by blending several real characters into one. In one memorable scene, Lean depicts Sherif Ali burning Lawrence’s khaki uniform and giving him the white garb of a nobleman of his clan as a replacement. This incident supposedly happened (if you believe the movie) as Ali and Lawrence led a small band of Arab fighters across the desert in a highly-fictionalized surprise attack from the rear of Turkish defenses at the Port of Aqaba at the head of the Gulf of Aqaba in present-day Jordan. The movie version is not even remotely close to the story told by Lawrence in Pillars. It’s dangerous to base one’s understanding of history on films one sees in a movie theater, regardless of how many Oscars it won.

In August 2013, we here at AXP published an article by one of our most prolific and best-loved contributors over the years, Abdulateef Al‐Mulhim, Commodore, Royal Saudi Navy (Retired) about the national headdress of Saudi men, the red and white-checkered Ghutrah.

“The Ghutrah is a squared cloth folded into a triangle,” he wrote. “In olden days, even before the advent of Islam, covering the head in old Arabia was part of a man’s routine. Many believe that the heat had something to do with the headdress. The first known pictures of Arabia showed men wearing a piece of cloth with different colors with a band holding it on top of their heads. There were no stylish white or red and white-checkered Ghutrah then. But photographs taken about 50 years ago show men wearing white Ghutrah.”

“The red and white Ghutrah,” he continued, “was not introduced till about 50 years ago. … For decades, British soldiers wore Ghutrah in the desert countries which were part of the British Empire. Historians say that because of the utility of the new British material, many people in the Arab world took to the British style, and they gave it different shapes. It was worn in Iraq, Syria and Jordan and later Palestinians too began wearing it. As time passed, fewer people in these countries wore Ghutrah, but it continued to be the national headdress in the Arabian Gulf countries. Saudi Arabia saw the introduction of two kinds of Ghutrah — the white one and the red and white-checkered version. Prior to this, a greenish colored Ghutrah was popular among many people and was worn by the old Saudi army and police. … The red and white checkered Ghutrah came from London. … The Saudi national headdress was designed in the United Kingdom and Switzerland.”

How many of you readers have red-and-white checked Saudi ghutrahs sitting around your home somewhere? I have several, and occasionally I’ll pull one out and use it for a tablecloth for a barbecue dinner on the backyard deck.

Recently a friend commented on my colorful checkered tablecloth and asked me where I bought it.

“Where’s that? I’d like to buy one for myself.”

“Dhahran’s in Saudi Arabia. It’s where Aramco has its headquarters.”

“Maybe you can buy one for me next time you’re there.”

“You can’t tell a book by its cover,” they say. And you ought not to judge a person by the clothes they wear. Given the unique character of the land that is Saudi Arabia and the extremes of its climate, the ghutrah is an ideal choice for headdress there. The ghutrah is something to be honored. Hats off to the ghutrah!