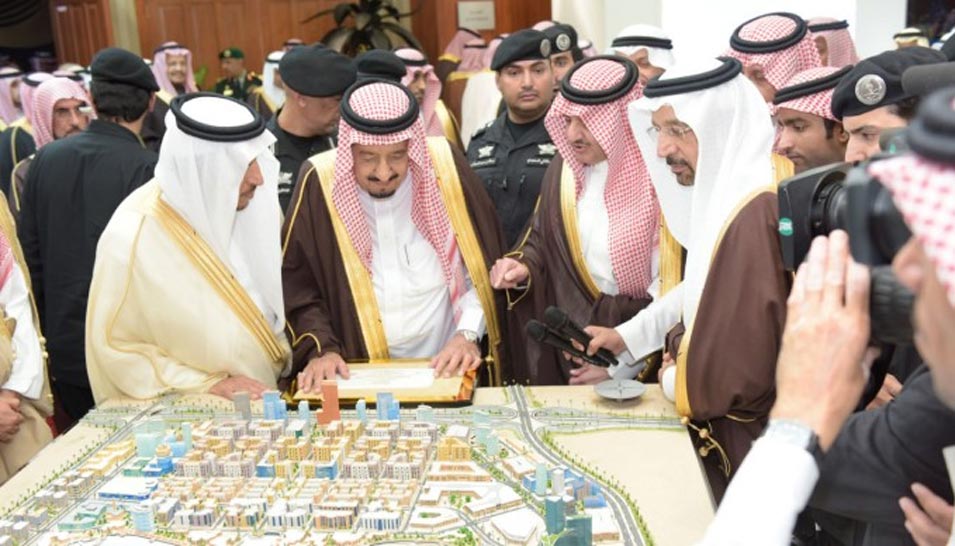 Sadara and Satorp represents a bold undertaking for Saudi Aramco and its respective partners, Dow Chemical and Total. It is a major driver in achieving our goals of greater integration and value addition. Sadara and Satorp represents the concrete realization of our distinct yet complementary corporate visions - it is one way in which Saudi Aramco is helping to deliver on its abiding commitment to the Kingdom.

The two projects are among the biggest in their industries worldwide, will further stimulate Saudi Arabia’s economic growth, and will create investment and job opportunities in line with Saudi Vision 2030.

The Custodian of the Two Holy Mosques King Salman bin Abdulaziz Al Saud today inaugurated the Sadara Chemical Company (Sadara) and the Saudi Aramco Total Refining and Petrochemical Co. (SATORP). The two projects are among the largest facilities in the refining and petrochemicals industries that support the objectives of Saudi Vision 2030.

The Vision aims to create new industries that will help provide new job opportunities for Saudis, as well as attract foreign investment to the Kingdom. Sadara and SATORP are aligned with these objectives and are the result of successful partnerships between Saudi Aramco and two global companies—The Dow Chemical Company and Total—which are leaders in their respective areas of business.

His Excellency Khalid Al Falih, Minister of Energy, Industry and Mineral Resources and Chairman of Saudi Aramco said: “Sadara and Satorp represents a bold undertaking for Saudi Aramco and its respective partners, Dow Chemical and Total. It is a major driver in achieving our goals of greater integration and value addition. Sadara and Satorp represents the concrete realization of our distinct yet complementary corporate visions - it is one way in which Saudi Aramco is helping to deliver on its abiding commitment to the Kingdom.”

The Sadara project is the largest integrated chemicals complex in the world to be built in one phase. It is a joint venture between Saudi Aramco and The Dow Chemical Company in Jubail Industrial City in the Eastern Province of Saudi Arabia. The first phase commenced operations in 2015, and the remaining operating units are scheduled for completion by the end of 2016. The production capacity is more than three million tons of various plastics and chemicals product annually.

Amin Nasser, president & CEO of Saudi Aramco, said: “Sadara is a huge testament to the power of partnership. We have faced many challenges over the years – complex technological challenges, economic uncertainty - but both parent companies stood firm to make Sadara a reality. The Sadara project contributes to the development of the manufacturing and the technology industries in the Kingdom, and will have a great impact on the economy, directly and indirectly.”

The foreign direct investment used to establish Sadara is the largest in the Saudi petrochemicals industry. The company is the cornerstone of Saudi Aramco’s strategy to achieve integration in processing and refining to produce high value chemicals and benefit all stakeholders.

The partnership with Dow Chemical allows Saudi Aramco to unleash its full potential in chemicals and to benefit from innovative technologies in producing high value chemicals never before produced in the Kingdom.

The refining, processing and marketing projects will help Saudi Aramco achieve the maximum value possible from hydrocarbons in the Kingdom and establish new industries to create more jobs for Saudis. Through 14 newly introduced technologies, the project ushers the Kingdom into a new age of economic diversification, new products and job opportunities.

Sadara is the first chemicals complex in the GCC region that uses naphtha as feedstock. The complex has a unit to crack naphtha that can process 85 million standard square feet of ethane and 53,000 barrels per day of naphtha as a feedstock to produce three million tons of high value and high performance plastics annually. Once fully operational at maximum capacity, the project will employ more than 4,000 people. In addition, the PlasChem Park, a world-class industrial park for chemical and conversion industries created by a collaboration between Sadara and the Royal Commission for Jubail and Yanbu, will create 15,000 direct and indirect job opportunities for Saudis in Jubail alone.

The Saudi Aramco Total Refining and Petrochemical Co. (SATORP), a joint venture between Saudi Aramco and Total in Jubail, will support Saudi Aramco’s efforts to expand the value chain and achieve maximum value from the Kingdom’s resources. It can process 400,000 barrels of heavy Arabian crude daily into low-sulfur gasoline, diesel and jets fuel that comply with the standards in the United States, Europe and Japan. It also produces more than one million tons of paraxylene, benzene, sulfur and pure petroleum coke that fuels cement plants and electric power stations.

President and CEO of Saudi Aramco, Amin Nasser, stressed the importance of projects such as SATORP to further stimulate the Kingdom’s economy. “The Kingdom will benefit from the commercial activities of SATORP. It will have a Kingdom-wide effect, and SATORP will provide the additional boost for Saudi Aramco to become a fully integrated energy and chemicals leader which augurs well for its larger portfolio diversification agenda.”

This joint venture will create approximately 5,700 new direct and indirect jobs and will serve Saudi Aramco’s vision to become among the world’s top three refiners. The venture showcases the positive impact of foreign direct investments on the Saudi economy. The construction of the project involved 45,000 workers with 80% of the work performed by local subcontractors with a Saudization rate of 65%.