Supported by Saudi Aramco, more than beekeepers in the Kingdom are finding a reliable livelihood for themselves and their families. 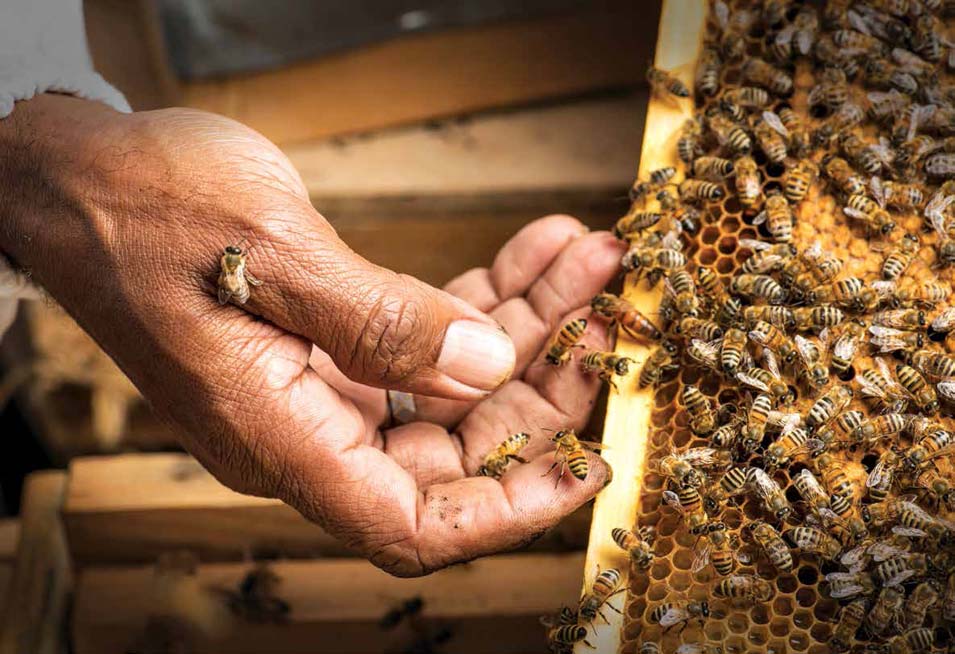 Al-Baha — Man’s relationship with bees and collecting their honey goes back thousands of years, with drawings of such activity seen in cave drawings.

During the long journey from primitive life to civilization, man has learned how to raise bees to increase the production of honey, and it has become an industry that produces a reliable source of income in many regions around the world.

Among those regions is the al-Baha area in the southern part of Saudi Arabia, which has proven to be an ideal place for beekeeping. Flowers and trees vary between the temperate Sarawat Mountains in summer and the warm Tihama plains in winter.

Despite the succession of generations to beekeeping in the region, the profession has remained a modest craft in terms of production, marketing, and economic return for quite some time.

A tour of the basil plant at the Desert Plant Nursery, established under the Saudi Aramco initiative, reveals seemingly endless rows of seedlings that are distributed free of charge to beekeepers and citizens alike. The nursery provides 100,000 seedlings per year of 30 species of trees that are fed by bees, such as seder, talh, rosemary, and others.

The initiative of Saudi Aramco to support beekeepers in the area, in cooperation with the Association of Beekeepers Cooperative in al-Baha, has raised the profile of the profession. Beekeepers are being trained in modern beekeeping methods, and have been provided with the necessary tools and equipment of the highest international quality standards to ply their craft. 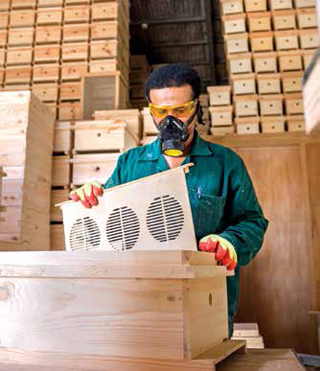 In al-Baha, beehives are made of Swedish wood in scientific and efficient ways that help to increase honey production to protect local trees. Also, a blacksmith workshop for the manufacturing of beekeepers’ requirements, and a laboratory to examine and sort honey and fill it with the latest tools and scientific methods, have been established. 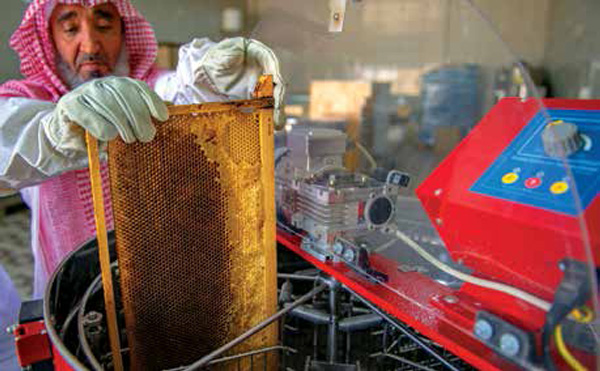 Mohammed A. Al-Shaer, 59, puts his crop of honey into one of the honey-sorting machines inside the Beekeepers Cooperative Society in al-Baha. Al-Shaer’s interest in beekeeping started as a hobby and then he completed three specialized courses provided by the association to make beekeeping a source of income.

The end result from supporting youth interested in beekeeping has created a steady source of income for many, and has seen the profession develop into a substantial contributor to the economy in the region.

The creation of numerous jobs in this field has also made a significant contribution to the ecological balance in the region by increasing the number of bees and trees in the area.

A tour of the basil plant at the Desert Plant Nursery, established under the Saudi Aramco initiative, reveals seemingly endless rows of seedlings that are distributed free of charge to beekeepers and citizens alike. 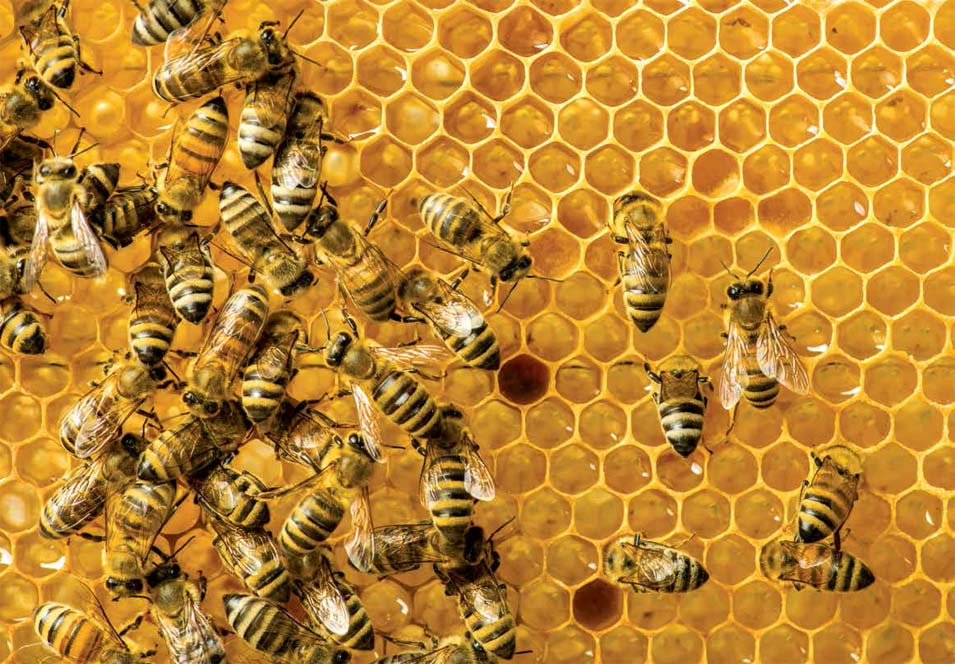 Al-Baha honey is available in a number of outlets in the Kingdom, including Dhahran.

The nursery provides 100,000 seedlings per year of 30 species of trees that are fed by bees, such as seder, talh, rosemary, and others. A total of 50,000 seedlings have been planted in five sites in the past few years, resulting in new bee populations, which has also assisted in the development of vegetation in the region. 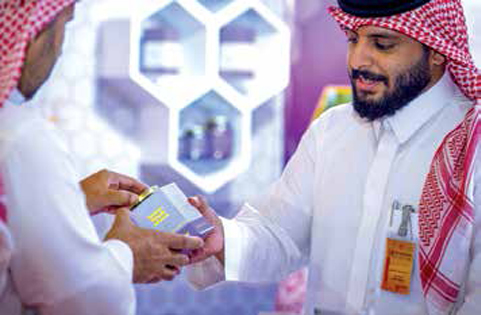 Raed Al Khater presents one of the “honeycomb” products during the 12th International Honey Festival in al-Baha, where 18 members of the association displayed their honey production. 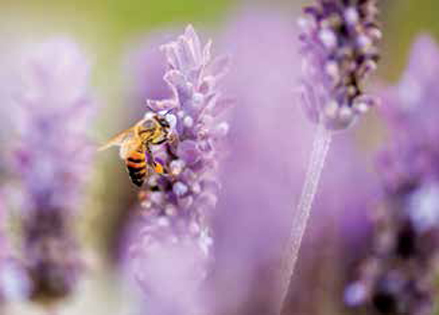 The Association of Beekeepers Cooperative has established a workshop for those new to the profession, highlighting the latest tools and scientific methods. Also provided is a laboratory for testing honey, and packaging of the final product has also been developed. 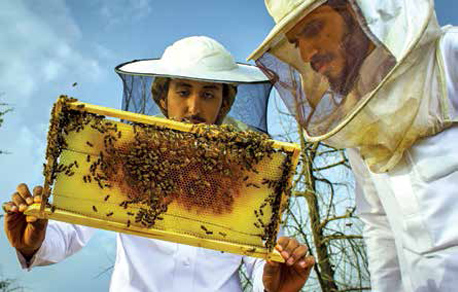 Omar A. Al-Hassan and Mut’ab A. Al-Ghamdi, two young men from the al-Baha area, examine beehives in the city of Baljurashi. 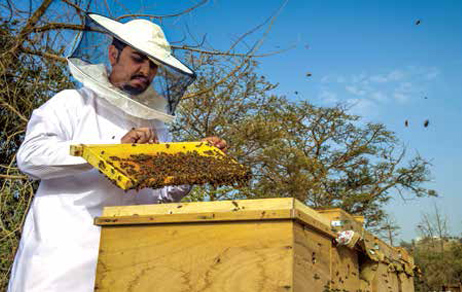 Musab A. Odeh, 23, who owns his own honey shop in al-Baha, is one of more than 700 citizens in the region who have benefited from an initiative that provides training and support on the basics of beekeeping. The goal for the initiative is to train and support 900 citizens by 2020.

Along with the support from Saudi Aramco, this has all added up to a thriving industry in the Kingdom, and many young Saudis — especially in the al-Baha region — are seizing the opportunity and making the most of it.