The Wonders of the Red Sea 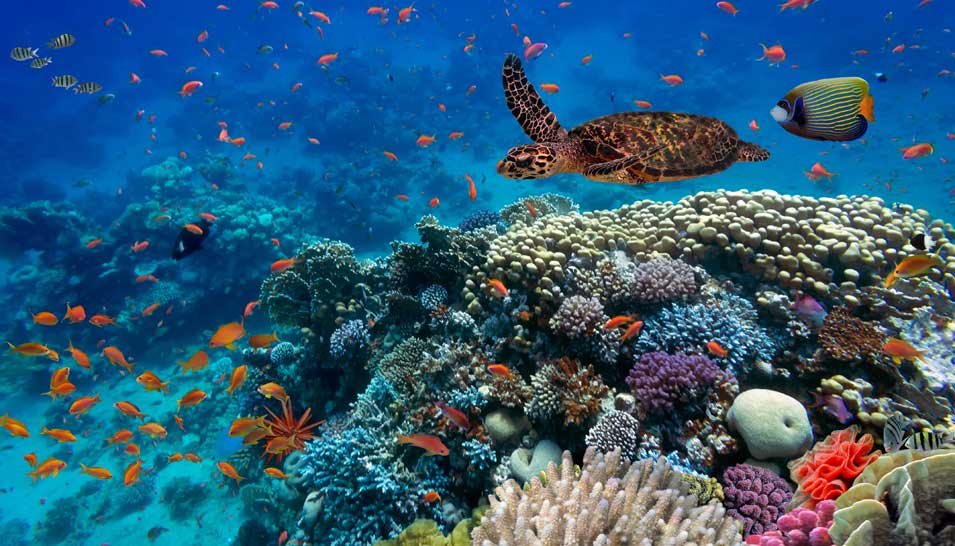 Saudi Arabia is a special place. The Kingdom owes a major component of its unique identity to the distinctive geological history of the region—on land and sea. The Arabian Peninsula sits squarely between two fabled bodies of water with long and colorful histories: the Arabian Gulf and the Red Sea. Last week we wrote about the Arabian Gulf and its signature fish, the Gulf hamour. This week we shall write about the Red Sea—the world’s northern-most tropical sea—about its fish, and about some of its other attractions.

The unique geography of today’s Red Sea owes its origins to tectonic movements of the Arabian-Nubian Shield dating from the Oligocene Epoch roughly 55 million years ago through the beginning of the Miocene Epoch some 20 million years ago. Those shifts in the alignment of the earth’s crust (which continue today at a rate of under one inch per year) almost separated Arabia from North Africa, creating the trough—part of a large rift valley stretching across Arabia and Africa—that is home today to the body of water we know as the Red Sea.

Countries bordering the Red Sea like Saudi Arabia are mostly desert countries, and the entire region is subject to extremely hot temperatures, resulting in an evaporation rate of over 80 inches a year from the sea itself. Virtually none of the water lost to evaporation is replaced by inflows from rivers. Nor does the region’s minimal rainfall contribute to alleviating the loss. Instead, that evaporation deficit is replaced entirely by an on-going influx of water from the Gulf of Aden driven by winds through the eastern channel of the Bab el-Mandeb Strait. It is estimated that the entire waters of the Red Sea are replaced by this process every twenty years.

The Red Sea itself is relatively shallow, much like the Arabian Gulf. As a result of this and various factors, it is known for its elevated salinity level. A happy by-product of this fact is the added taste imparted to Red Sea fish. Some people claim you can cook them “as-is” without adding salt or pepper and still get a flavorful meal. Your fish-for-dinner options in either body of water are vast. The Red Sea is home to an estimated 1,200 species of fish, while 700 species call the Arabian Gulf home.

The rich biodiversity of the Red Sea boasts an impressive variety of marine and coastal environments bursting with spectacular fauna and flora and coral reefs that thrive among the mangroves and sea-grass beds, the salt-pans and salt marshes.

Red Sea fish are renowned for their extravagant colors. Ichthyologists tell us that the most brightly colored fish will win the fight in a contest for a mate. Red Sea fish are also said to change their color to indicate they are ready and willing to mate. Colors serve as camouflage for some, while others use colors to communicate. The most colorful fish are found around coral reefs, as anyone who has ever snorkeled or scuba dived in the Red Sea’s warm waters can readily attest.

The most famous fishing/diving/snorkeling waters of Arabia extend along the Red Sea coast near Jeddah. Access is generally limited to people living in the Kingdom and to pilgrims visiting the holy cities of Medina and Mecca on the annual Haj. Living in the KSA thus presented aquatic-minded ExPats with a rare and valuable perk.

In February of this year, AXP featured a story on annuitant Everard (Eddy) Edoo. When Eddy, a dedicated scuba diver and native of Aruba, was told a job was available in Saudi Arabia, he nearly jumped out of his chair. He described his reaction this way:

“He told me that Saudi Aramco had my CV and wanted to interview me by way of a video conference call. Just getting ready for bed at that moment, the only thing running through my mind was diving the Red Sea. You either have to be a resident of the Kingdom or on a pilgrimage to Mecca to get access to those waters. … Every month or so, and with not another soul to be seen, we dove the Red Sea from a live-aboard for the whole weekend. I was always filled with a deep sense of gratitude at such moments, for money cannot buy opportunities like those. … We did stuff Jacques Cousteau could never have dreamt of and in the process became friends for life.”

Staying submerged in the Red Sea can be a challenge. As a consequence of the water’s high salinity level, snorkelers may discover to their surprise that whenever they dive in, the sea pushes them back to the surface. They need to wear heavy weights if they wish to stay underwater for any length of time. 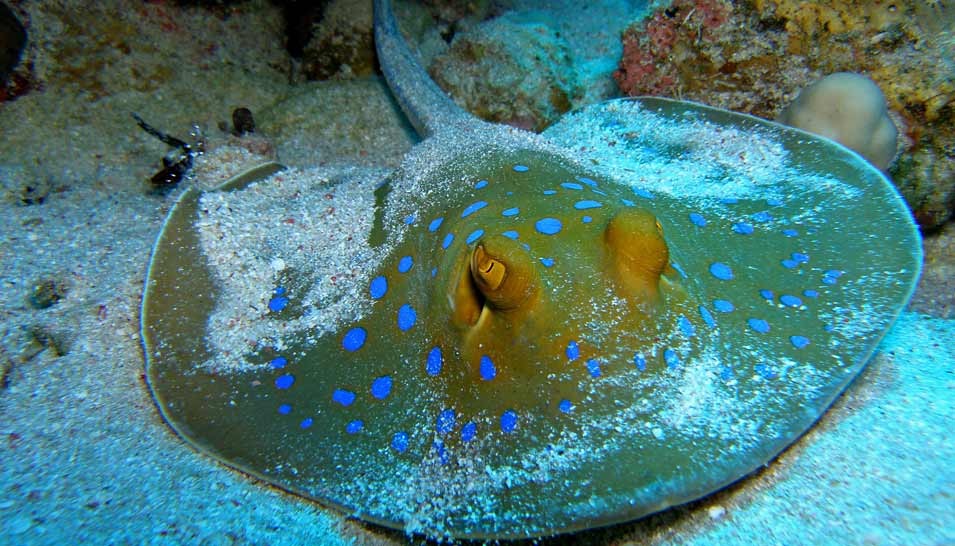 Just a few of the many colorful fish found in the Red Sea’s waters include the Multi-Colored Parrot Fish, the Rainbow Fish, the Queen Trigger Fish, the Red Sea Clown Fish, the Klunziner’s Wrasse, the Bluespotted Stingray, and the Coral Grouper.

Caution is advised when snorkeling, swimming, or scuba diving in the Red Sea. There are over 30 species of sharks inhabiting its waters, and other aggressive fish such as moray eels and surgeonfish. There are also poisonous fish like Pufferfish and Boxfish. Be sure you know your fish before you throw it on the barbecue and grill it for dinner!

By all measures, the Red Sea offers some of the best Scuba diving in the world. It is generally considered one of the Seven Wonders of the Underwater World with its abundance of sheer drop-offs, hundreds and hundreds of fish species, 500 or so different types of coral, seagrass meadows, coral-encrusted wrecks, and more. For dedicated divers like Eddy Edoo, other Aramcons, and returning students, the Red Sea is an underwater paradise, a dream come true.

The common consensus seems to be, the best Red Sea diving in Arabian waters is centered around Jeddah. There are many remarkable shipwreck sites one can explore, and one of the most notable is the Abu Madafi reef. There one can find an array of old wrecks, many of them overgrown with coral. Three notable wrecks found there are the Boiler Wreck at a depth of 20 meters/66 feet; the Old Coaster also at a depth of 20 meters/66 feet; and the Pipe Wreck at a depth of 25 meters/82 feet. Corals have taken over the Boiler Wreck, turning it into a man-made reef. Much of the ship’s structure is still visible.

A visitor to the Abu Madafi reef had this to say about what he saw there:

“The particular joy of this site is the complex system of caverns and gullies that cut through the reef, some in totally still water with sandy floors, others undulating and filled with boulders. Cathedral-like arches and small caves make the reef probably the most photogenic off Jeddah.”

Stories abound for how the Red Sea got its name. Normally a beautiful blue-green in color, the sea sometimes appears red due to seasonal blooms of a marine algae known as Trichodesmium erythraeum, which produces red blossoms. When the algae die off, they turn the sea a reddish-brown color. That’s the most common explanation, but far from being the only one.

For the historically-minded, there is another explanation worth mentioning. In ancient times, colors were used to indicate direction. “Black” to the Greek historian Herodotus (and to the ancient Chinese as well) meant north; “green” east; “red” south; and “white” west. Herodotus used the terms “Red Sea” and “Southern Sea” interchangeably in one of his works.

Recognizing the benefits of attracting foreign visitors interested in exploring the wonders of the Kingdom’s Red Sea waters, the Saudi Commission of Tourism recently announced plans to develop a ‘semi-autonomous’ visa-free travel destination along its northwestern Red Sea coast with a minimum of restrictions. The project will include diving attractions and a nature preserve. Luxury hotels are planned designed like those of the Maldives. The ultimate goal is to open the country’s Red Sea coastline to tourists from around the world.