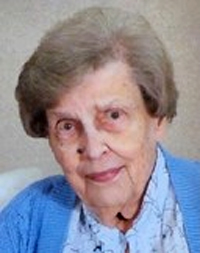 Barbara S. Hicks, 97, of Bethany Village, Mechanicsburg, PA, passed away April 20, 2019 at 5:30 PM. Born Oct. 3, 1921, in Peking, China, she was the daughter of the late Ruth and Bird Stephenson. Her parents went to China in 1920, where Barbara's father taught at the Peking Union Medical College. They returned to the United States in 1924, and Barbara spent most of her childhood in Buffalo, NY.

She graduated from Oberlin College, Ohio, in 1943 majoring in physical education and modern dance. She took additional courses to become certified to teach music, and taught music at a variety of schools, most notably in Springville, NY at Springville Elementary School, in Tonawanda, NY at Kenmore East Senior High School, in Dhahran, Saudi Arabia at the Aramco School, and finally in Severna Park, MD and the Severn School. Her life revolved around her family and her music as she was an accomplished pianist and organist. She directed numerous choirs and musicals throughout her life, well into her 80's and continuing with piano and organ publicly until just before her death.

Surviving are her sons, Stephen J. Hicks, Kenyon I. Hicks, Jr., and Leroy T. Hicks; 8 grandchildren; and 10 great-grandchildren. In addition to her parents, she was predeceased by her husband, Kenyon I. Hicks, Sr.; her brother, Richard Stephenson; her sister, Dorothy Rogers; and her granddaughter, Susan Hicks. A memorial service will be held at Bethany Village East, Richard D. Rife Center, 325 Wesley Dr., Mechanicsburg, PA on May 17, 2019, at 11:00 AM. Please make donations in her name to charities of your choice, in lieu of flowers.