A Tour of Islamabad, Wazirabad and Lahore Iqbal Khan and his Engineer friends
Former Aramcon and frequent contributor to Aramco ExPats, Engr. Iqbal Ahmed Khan who now lives in Karachi, Pakistan and is one of the founding members of the Saudi Aramco Ex-employees Association (SAEEA) shares the story of the many sites and friends he visited on his tour of Islamabad, Wazirabad, and Lahore from March 30 through April 8, 2012 such as Saidpur village in the Margalla Hills, the Faisal and Badshahi Mosques and the Minar-e-Pakistan. "The purpose of my visit to Islamabad was to accompany my nephews as a guardian; who were scheduled for interviews with the British Embassy for issuance of British Passports. During my stay, I visited old friends from my college years. I also visited famous places in Islamabad along with my friend Engr. Khalid Mushtaq. Among the places I will remember are: Saidpar Village with Margalla Hills in the Background Boating at Lake View Park
In the evening Engr. Khalid Mushtaq hosted a dinner for old friends and I had the pleasure of reconnecting with a few old officers from my University (NED) period as well. Faisal Mosque
The following day, our friend Engr. Syed Zafaruddin Ahmad arranged a lunch at his office and invited two more NEDian friends, Engr. MMM Jafri and Engr. Moinuddin Baig. Engr. Jafri came from the nearby city of Taxila to join us for lunch. All five NEDians had a lot of fun and exchanged sweet old memories of NED Government Engineering College and the career achievements of the past forty-five years. After lunch we visited Faisal Mosque and a few other places in Islamabad. In the evening, Engr. Khalid took me to Monal Restaurant which is situated about 20 KM up from the ground.  The road to Monal Restaurant goes to Pir Sohawa and Daman-e-Koh. I enjoyed first the ride and second the food and every moment at the restaurant. Looking down from the top reminded me of the old days of Karachi City, “ROOSHNIO KA SHAHAR”. Mohammad Tariq Pervez and Kashif Zia
I will never forget the hospitality shown by Khalid and Bhabi Shabnam. I enjoyed every moment of my stay with them. We did share a lot of sweet memories starting from Quetta down to Islamabad. We met last in Quetta when I was working in Khuzdar and Khalid was doing a course in Quetta. The next day, I thanked the family and Sheeraz Khan for their honorable hospitality and with this respect shown I left for Wazirabad. I took a local bus to enjoy the ride and the small villages in between Islamabad and Wazirabad.  My friend, Mr. Mohammad Tariq Pervez who worked with me for 30 years with Saudi Aramco, welcomed me in Wazirabad. We enjoyed talking about the old days when we were together at Ras Abu Ali Offshore Oil Field - Saudi Aramco. The visit was very healthy and enjoyable. Although Mr. Pervez was not well for the last few months, he and his family showed considerable hospitality taking good care of me as long as I stayed with them. It was really fun visiting and to see life in a small town of Punjab. 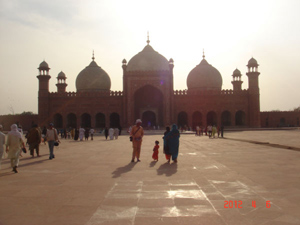 Badshahi Mosque
The last stop of my trip was Lahore, the capital of Punjab Province. I reached Lahore after a two hour rail train journey from Wazirabad. My old friend Mr. Ziad Anwar Butt was there to welcome me. In Lahore, we visited: Iqbal Khan, Ziad A. Butt, and Mohammed Aleem
With many sweet memories I had to leave for Karachi. I enjoyed the bus service from Lahore to Karachi via Okara, Khanewal, Bhawalpur, Rahim Yar Khan, Sukkar, Moro, and Hyderabad. I wish to thank all my friends from the bottom of my heart especially, Khalid, Tariq and Ziad for the honorable and respectable hospitality shown to me during my stay with them. It made my trip a great success." View more photos in the Aramco ExPats Galleries.
Share This:
comments powered by Disqus