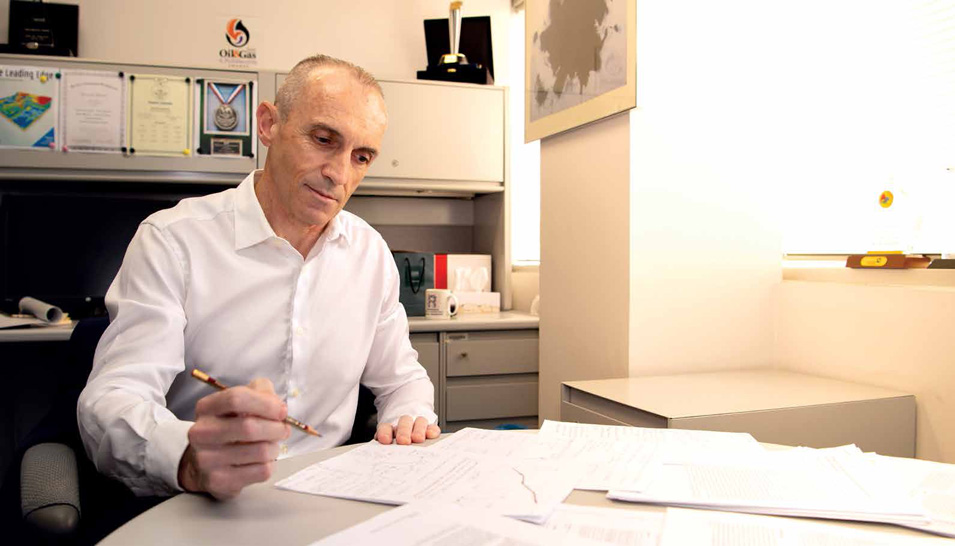 Included in Colombo’s acknowledgment was his work into reservoir monitoring with 3-D surface-to-borehole electromagnetic (EM) techniques — a waterflood monitoring technology developed by Colombo at EXPEC ARC, and protected by international patents owned by Aramco.

“It is actually really difficult to remotely sense how fluids in oil and gas fields are moving,” he said. “Fluids leave extraordinary signatures when we measure them with electromagnetic methods.”

Colombo says there are many important aspects to consider when performing geophysical monitoring.

“The fluids dynamically change due to production, and we strive to maintain our knowledge of the reservoir’s movement with remote geophysical tracking sensing,” he noted.

Behind receiving the award, Colombo cites his passion for integrating geoscience data as the future for better petroleum exploration, and reservoir monitoring and management.

Colombo advises collaboration to integrate all these data sources together.

Colombo has been investigating quantitative multiparameter inversion techniques for the past 20 years. He advises that data integration is the key future opportunity in reservoir studies, “whether through integration of conventional methods, or through machine learning techniques.”

“The specific challenge of fluid monitoring also represents a big opportunity for electromagnetic-based methods, as well as for seismic integration and joint inversion,” Colombo said. “Currently, I am working on borehole sensor development based on capacitive electric field measurements, and fiber optic EM measurements, for permanent installations in the reservoir.

“That work doesn’t happen accidentally or alone,” he added.

When asked about the most notable work he has been part of at Aramco, Colombo says the surface-to-borehole EM experiment was monumental.

“It took several years of preparation, simulation studies and engineering developments for the source and receivers before implementation in an active well,” Colombo said, adding that what helped was the accurate simulations performed. “We spent a large amount of time analyzing all the variables before conducting an experiment that had never been tried before.”

Also pointing to the outside-of-the-box Aramco technology “pQC” for near surface seismic analysis, Colombo said this is performed in a fraction of the time needed by conventional approaches to enhance imaging deep into the subsurface.

Colombo, an Italian native and graduate of Universita’ degli Studi di Milano who joined Aramco 12 years ago, said he was both honored and humbled to receive the award.

“It really is recognition toward the Reservoir Multiphysics Team in EXPEC ARC, and the many impressive fields managed by Aramco.”

For Colombo, his passion for geosciences, and especially geophysics, equates to enduring personal drive, “The more difficult the challenge, the more interesting the problem to solve.”