Camping with Camels: My Introduction to the Kingdom - Part III

The desert floor stretched before us as we headed west. As the hours passed and the heat soared, the terrain became flat and expansive with mirages dancing on the horizon. It was evening once more as we approached Tayma and, once again, necessary to camp before it became pitch dark. In the distance, numerous sandstone rocky formations could be seen, and we decided to pull off the road and camp before we became totally lost. These were the days before GPS, when all one had for navigation was a compass. Maps were so rare as to be basically nonexistent.

We awoke surrounded by incredibly beautiful sandstone hills, carved into unusual shapes by the endless winds crossing these desert plains. Many of the hills were covered with rock art, which nowadays are of much interest to archaeologists researching on the importance of Tayma and its links to Babylon. 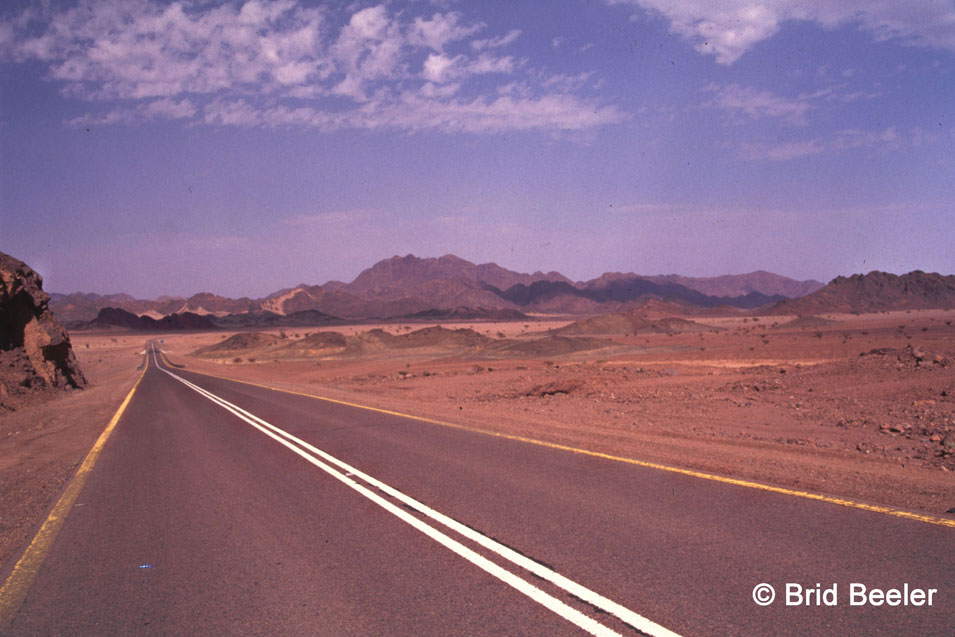 After several more hours of driving, we reached Al Ula, the ancient site of Mada’in Saleh, sister city to Petra in Jordan. During the first few centuries AD the Nabateans made their capital here and became rich off trade and protecting safe passage for those headed for the Levant.

We soon found ourselves in a valley of over a million palm trees nestled among red rock canyons. Pausing to walk beneath a group of date palms, we found ourselves in a magical setting. The palm canopy overhead shielded us from the harsh sun, birds serenaded us with their soft chorus and water bubbled gently through a complex maze of irrigation channels. 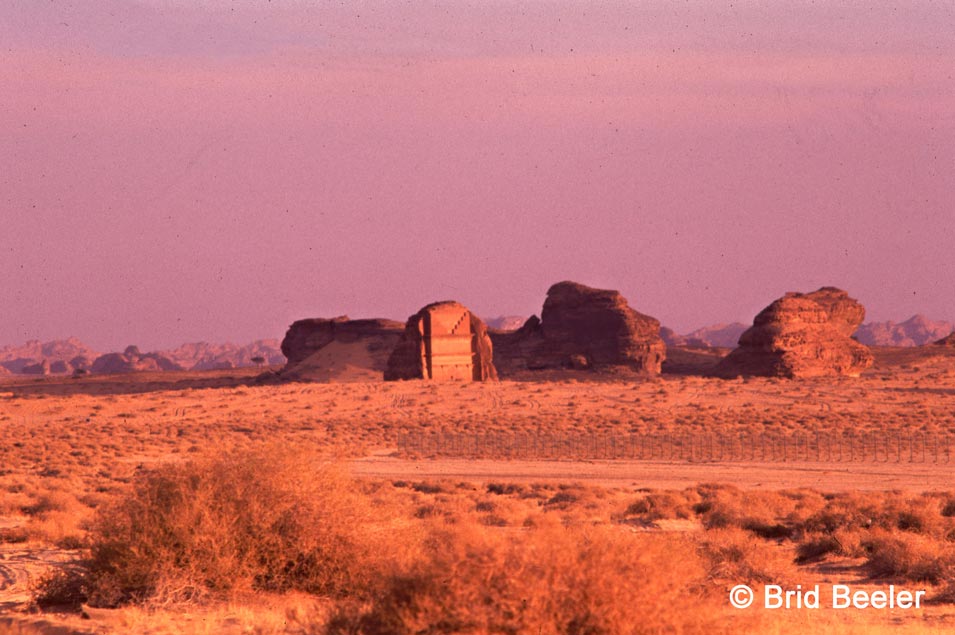 Mada’in Saleh was our destination for the next few days, and we intended to explore the valley, visit Qasr al Farid, Al Diwan, Qasr al Bint and all the tombs scattered throughout. We had been told that there would be a security guard at the archaeological site, but we found the guard’s hut empty. We simply drove in and set up camp.

The night sky in this part of Saudi Arabia is truly spectacular and with our athl (firewood) we sat down to enjoy the milky way and watch the rise of the crescent moon, laying on its back, so close that one could almost believe you could reach out and touch it. We had a good view because, camping in the heat, we opted to sleep outside on traditional camping cots. 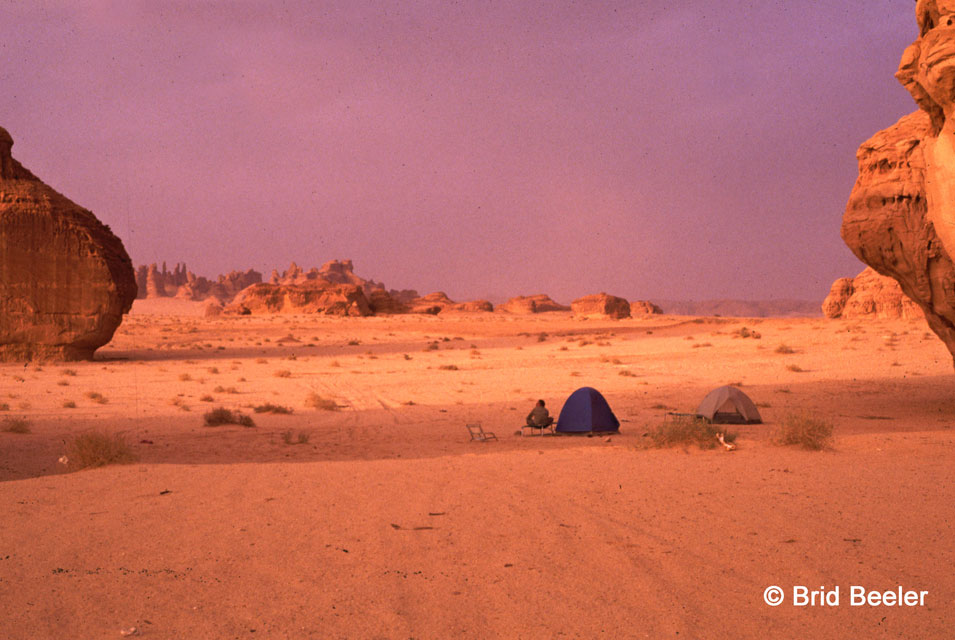 The next day we madly explored with no other visitors in sight. Having one of the most important archaeological sites in the world all to ourselves, we drove, walked and hiked up the rocks overlooking the area. It was eerily silent, pristine and devoid of graffiti. However, many of the tombs were pockmarked from gunshots fired during the British Arab Revolt or by local Saudis using them for target practice. The eagles carved over most of the doors had been beheaded, perhaps because they had been considered idols. While having lunch during the heat of the midday sun in Al Diwan, sitting on what was once a Majalis, a ranger appeared. None in our group had any Arabic and he obviously had no English. He was none too pleased at seeing us and made it known that he wanted us to move out of Al Diwan, which we did. Fortunately, we had just finished lunch and were on dessert, indulging in some juicy imported Lebanese oranges. 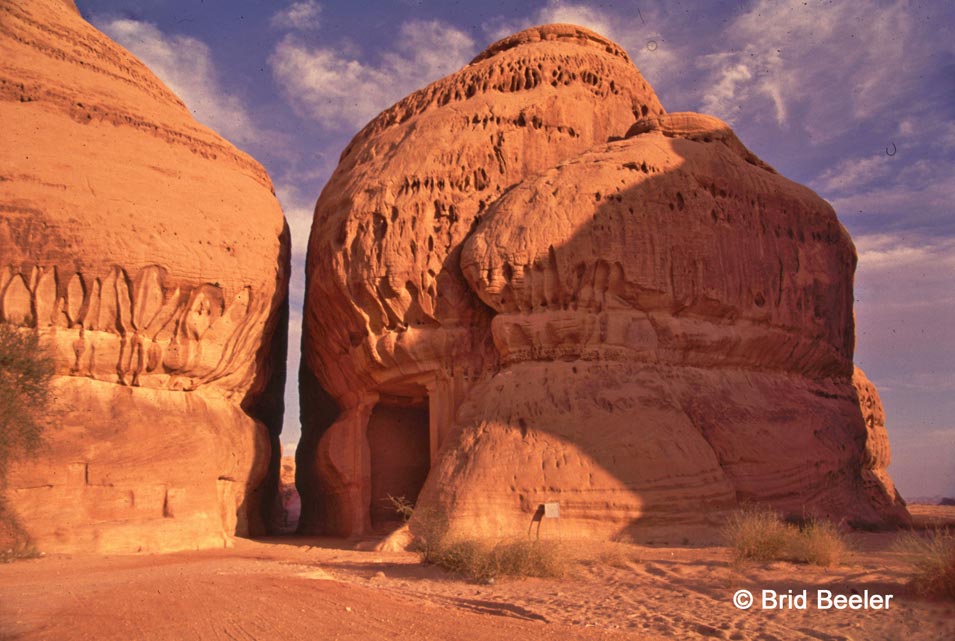 We got back in our vehicles and tried our utmost to lose the guard, who finally gave up the chase and went away. After another night camping in this oasis, we drove among the wadis and rock formations and visited the nearby railway station attacked by T. E. Lawrence during the Arab Revolt. Its old rusty engine and carriages sat sadly on the track, lost in the passing of time, their wooden sides long ago stripped to fuel Bedouin campfires. In the fort that once housed the soldiers, a central courtyard was surrounded by rooms with commanding views of the desert terrain from the upper terraces.

At the other end of Al Ula valley were the Lihyanite tombs, often referred to as the Lion Tombs and, while we could see them from a distance, they were protected by high chain link fencing and the gate was locked. We tried to locate someone in a nearby house to see if we could go into the area to walk up to them, perched high up and carved into the face of the sheer cliffs, but nobody was to be found.