Celebrating our future women in STEM 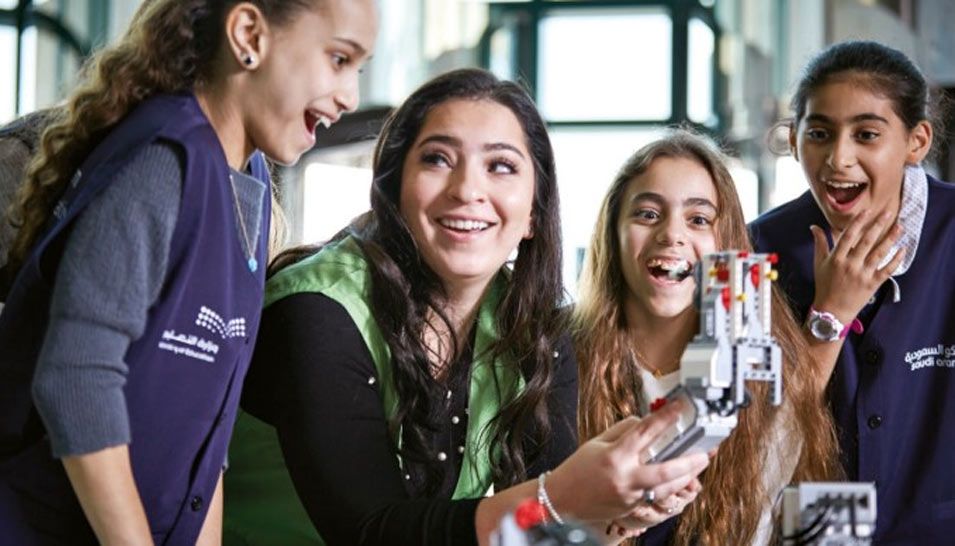 A program offered by Saudi Aramco that promotes knowledge and entices female students to pursue career paths in Science, Technology, Engineering, and Math (STEM) is earning rave reviews from participants.

“My daughter had a life-changing experience by attending Saudi Aramco’s recent STEMania Program,” said the mother of a first-grade student from the last cohort of the 300 girls who recently graduated from the Saudi Aramco STEMania Program. “As a mother, it was so overwhelming to see how this program went far beyond introducing my 7-year-old daughter to basic science concepts. It actually also played a major role in shaping her personality by emphasizing teamwork, problem-solving, and time management skills, which resulted in her speaking in public for the first time in her life to a crowd of about 450 attendees at the recent STEMania graduation event.”

STEM programs worldwide promote knowledge and entice students to pursue career paths in the four fields. The STEMania Program is Saudi Aramco’s version of STEM that targets young females in an all-female environment. The program is sponsored by the Women Development and Diversity Division (WD&DD) in collaboration with the Ministry of Education.

STEMania looks to spur excitement and knowledge for STEM fields; support the needs for Saudi Vision 2030 by promoting a pipeline of young women in the workforce; and foster growth for possible future women employees in Saudi Aramco and other organizations. An after-school program for elementary- and intermediate-level girls in public and private schools, it features two sessions over a six-week period. It achieves its mission of increasing the number of women entering STEM fields by training teachers, engaging students through hands-on experiments, and connecting them with female role models known as “STEM Friends” working in STEM fields. Saudi Aramco has 50 STEM Friends who are modeling the way for future generations.

Since the program’s inception in 2015, WD&DD has successfully impacted the lives of more than 900 young female students by igniting their interest to pursue STEM disciplines. STEMania was piloted in 2015 with 300 girls from the intermediate level in six public schools in Dammam, al-Khobar and Saihat. Since then, it has broadened its reach to impact an additional 600 young females and includes elementary students as young as first grade from public and private schools. It has added two schools by expanding its reach to Jubail.

At the second STEMania graduation ceremony at a school in al-Khobar, 300 young girls showcased what they learned by demonstrating their best projects. Mothers cheered for their daughters, as did school and Ministry of Education officials, friends, and STEM Friends. Mothers and teachers shared stories of how the program had transformed shy girls into STEM explorers who now ask questions and wonder why things work the way they do.

STEMania’s benefits exceeded the students’ influence and reached the supervisors and teachers, as well. Ghaidaa Al-Shehri, a supervisor who taught basic programming concepts to students in grades 4 through 6, said: “This program had an effect on me personally as a supervisor and enhanced my ability to deal with different segments of the society. It enriched my experience in delivering information to students of different age groups, and made me more appreciative of the amount of effort exerted by teachers to deliver information to students.”

The graduation ended with WD&DD and the Ministry of Education recognizing the far-reaching efforts the many people who played a significant role in ensuring the program was a success.

A third-grade student expressed her gratitude to Rahmah I. Al-Nawwab, an outreach supervisor in WD&DD, by saying: “I wish the program ran every day of the week instead of only twice a week because I enjoyed it so much. I want to become an engineer one day, similar to the one who visited us during the program!”