Dates: The Miracle Food of Arabia 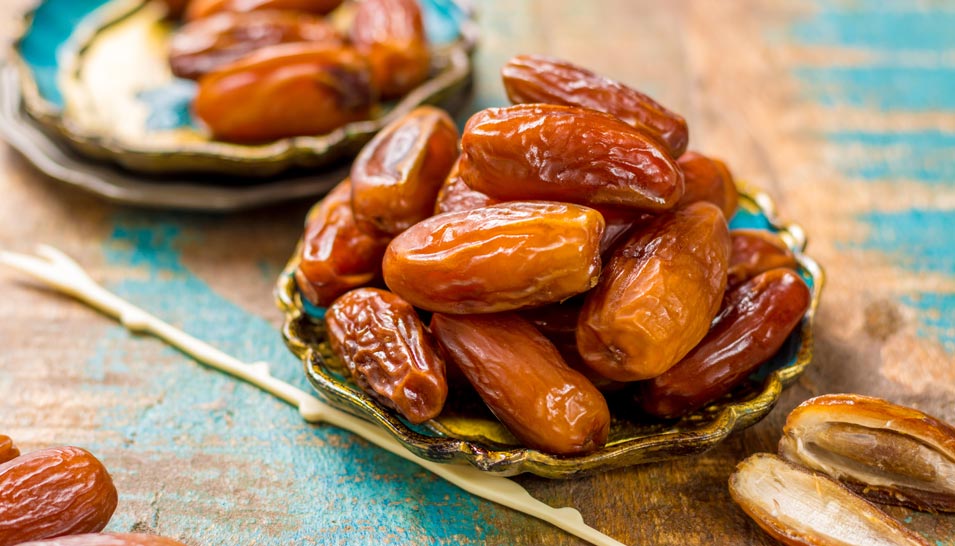 Absent the camel, the history of Arabia and the world would have followed a far different course than what it did. Much the same can be said of the date and its impact on humankind. Few foods save for rice, corn, grain crops like wheat, and the lowly potato have impacted human history as much as has the fruit of Phoenix dactylifera, the scientific name for the date palm, translatable as “the finger-bearing phoenix.” Certainly, none were any sweeter. Without date palms—often referred to in Islam as “the tree of life”—and their fruit, much of the Middle East would have been uninhabitable. As a powerful enabler of life in desert climes, the date stands alone in the annals of history.

Paleontologists tell us that dates first appeared 50 million years ago, while archaeologists tell us that they were first grown and harvested in eastern Arabia an estimated 7,000 years ago, making them one of the oldest known cultivated crops. It is noteworthy that date palms are the only plant appearing in petroglyphs anywhere in the Kingdom and that images of camels and horses came later. Tasty, nutritious, and widely dispersed, the date fed people in lands spanning the breadth of the Fertile Crescent from Mesopotamia in the east to Egypt in the west during civilization’s earliest days as it first began its rise.

Today the date remains a staple crop across a wide swath of lands encompassing parts of Spain and extreme southern Europe, North Africa, the Horn of Africa, the Middle East, the Indus Valley, and southern Asia, reaching all the way to southern China and parts of Malaysia. Owing to human intervention, its range today has been expanded well beyond those regions to include places like Mexico and the United States. In the U.S., where date palms were first introduced in 1900, dates are grown in southern California, Arizona, southern Florida, Nevada, southern Utah, and Texas.

Date palms love hot, dry, sunny weather, are averse to rain and cold, and in their natural state are most commonly found growing in swamp lands, in deserts near oases or where groundwater levels are high, and along mangrove sea coasts. Egypt is the leading producer of dates in the world, Saudi Arabia second, the U.S. nineteenth. It is with good reason that the coat of arms emblazoned on the flag of Saudi Arabia features a date palm.

According to taxonomic rank, there are 14 (some say 14, others say 15, we say 14, take your pick) different species of the genus Phoenix, unusual among members of their subfamily Coryfoideae for having pinnate leaves where the main vein extends from the base to the top of the leaf with smaller veins extending out from it, not palmate leaves where several main veins radiate out from a single central point where the petiole (leaf stalk) joins the leaf blade (the flat part of a leaf). All 14 species of genus Phoenix are technically members of the date palm group. Yet Phoenix dactylifera is the only one among them that is widely cultivated as a food crop for human consumption, although the fruit of two other species is judged edible, and that of several others is harvested for use as animal feed. Compared to the thin-layered smaller fruit of its fellow members of genus Phoenix, the fruit of Phoenix dactylifera is large with a thick layer of sweet, edible pulp, explaining its ascendance as one of the world’s premier food crops. As a testament to its popularity, Phoenix dactylifera is commonly known as “the true date palm.”

When we mention date palms in this article, therefore, we are referring specifically to Phoenix dactylifera unless otherwise noted.

Palms are often mistakenly referred to as trees, as the Beach Boys famously did in the lyrics to “California Girls”:

But calling a palm a tree (be it a coconut palm or a date palm or any other type of palm, for that matter) like what the Beach Boys’ Brian Wilson once did is a misnomer. Palms are not trees, but rather members of a group of plants known as monocotyledons. The word sages at Oxford define monocotyledon as “a flowering plant with an embryo that bears a single cotyledon (seed leaf). Monocotyledons constitute the smaller of the two great divisions of flowering plants, and typically have elongated stalk-less leaves with parallel veins (e.g. grasses, lilies, palms), which include grasses, bamboos, hostas, lilies, daffodils, irises, palms, and orchids.”

While acknowledging the unassailable correctness of those Oxford savants, we nonetheless pardon Wilson and his Beach Boy pals for their mistake in calling a palm a tree. “By a palm tree in the sand,” sounds so much better after all than does “By a palm monocotyledon (or, even worse, By a palm Coryfoideae) in the sand.”

Date palms are dioecious, meaning there are separate male trees with staminate blossoms and female trees with pistillate blossoms. Only female plants bear fruit. Date palms are naturally pollinated by wind, but in places like Al-Hasa Oasis where dates are commercially grown, little to nothing is left to chance, and the female plants are pollinated by hand or by specially-designed wind machines. In recognition of the importance of dates to human history and culture, two major date-producing sites—the aforementioned Al-Hasa in Arabia and the Palmeral de Elche in southern Spain—have been inscribed by UNESCO as World Heritage Sites.

Date palms have long served ceremonial and religious functions—for Christians, every year on Palm Sunday most especially. There are frequent mentions of dates in the Qur’an and the Bible. In Islamic culture, dates are considered purifying and are traditionally the first food consumed for Iftar after the sun has set during Ramadan. In the Qur’an, Allah instructs Maryām (the Virgin Mary) to eat dates after she gives birth to Isa (Jesus). Ancient traditions place palm dates in the Garden of Eden. The Prophet Mohammed once said, “There is among the trees, one which is blessed. It is the date palm, for it was created from the earth left over from the creation of Adam.”

“Date pollination is ensured by men carefully climbing each tree to hand pollinate. The pollen is taken from the male flowers and placed with the female buds which are wrapped in a net to keep the birds and insects away. Men whiz up and down the trees at a rapid pace carrying out this important, labor-intensive feat. Successfully fertilized, the female buds are carefully nurtured along on the road to bearing fruit. The dates from the early crop are golden in color, as hard as an apple, and tart in flavor. These are much sought after and are quite expensive at the onset of the season. As the crop slowly ripens, it softens and takes on a delectable, caramel-type flavor with maybe a little hardness. Eventually, the date fully ripens to a golden brown color.”

Beeler shared additional insights into the lives of dates:

“Dates can be stored in the freezer. Due to their high sugar content, they never completely freeze. Icy cold when removed from the freezer, they are allowed to warm to room temperature and served. Thus, in one form or another, dates are available all year round. Al Khalas, Al Sukkari and Al Khidri are probably the dates most revered and loved by all, but there are over 200 varieties of dates, and each person will debate over which is their personal favorite. In olden times, dates along with camel milk were the diet of the Bedouin. Bateel Dates, established in 1990, was the first Saudi company to elevate the date to gourmet level, working with a Belgian chocolatier. They stuffed them with nuts, dipped them in chocolate, or mixed them with marzipan and all manner of delectable edible concoctions. But the simple date, newly ripe and fresh off the palm frond, is still the preferred way to enjoy a date.”

The utility of date palms beyond producing fruit as a food source is extraordinary. Every part of the date palm from its deepest roots to its highest canopy has one or more uses, usually more: trunks for timber to build houses and boats and bridges; midribs of leaves to create items like crates and furniture; leaflets for weaving baskets and mats; fiber for fashioning cordage and crafting saddles for camels and horses; seeds for feeding livestock; and others.

In her email to AXP, Brid Beeler described a distinctive use of materials gleaned from palms:

“Palm fronds are woven into mats,” she wrote, “which are then placed on earthen soil like tablecloths. Upon that, a large dish of food is set out. Guests sit around the arrangement and communally dine from the same dish while eating dates and drinking gahwa arabiyya (Arabic coffee) a few ounces at a time from small, handleless, egg-shaped cups known as Finjan Gahwa.”

There is no limit to the Arab imagination when it comes to making good use of the date palm in its entirety to offset a dearth of available natural resources to work with. In the desert world of the Peninsula, scarcity has long been the mother of invention.

With their uncanny ability to withstand the rigors of extended periods of drought and extremely high temperatures, date palms enjoy life spans stretching as long as 150 and even 200 years. “A date palm is the only creation of God that resembles man,” an old Egyptian saying goes. “Unlike other trees, a date palm gives more as it grows older.”

The health benefits of dates are beyond count. They are high in fiber; high in disease-fighting antioxidants; supportive of better brain function; high in key minerals such as phosphorus, potassium, calcium, and magnesium; rich in amino acids; free of fats and cholesterol; low in sodium; high in carbohydrates; and packed with energy. In so many ways, dates help extend life while improving its quality.

According to researchers at the University of California at Davis, Bedouin Arabs whose diets prominently feature dates display an extremely low incidence of cancer and heart disease compared to people whose diets lack dates. Even when you factor in other elements in search of an explanation of why, their findings stand out. Dates have been shown to help regulate the digestive process; guard against diseases of the eye and night blindness; promote muscle and bone development; and so much more. The list of benefits delivered by this fruit of fruits goes on and on. It is no wonder that this delicacy is considered by many people a miracle food.

Given all that, it might be wise to follow the example of the Bedouins of the Kingdom who have depended on the date for sustenance and health needs for centuries upon centuries, all the while living under conditions most people elsewhere in the world would consider extremely harsh. To Bedouins, there’s nothing extreme or harsh about them; they’re simply the normal conditions of everyday life to which one must adapt. In date palms and dates they’ve found powerful allies when dealing with the challenges of everyday desert life confronting them.

The most difficult question left to decide concerning the dates of Saudi Arabia is determining which of the 45 varietals grown there is #1. Boosters of the oasis at al-Hasa insist that its khalasah dates are indisputably the tastiest, the finest, the best in the world. AXP readers no doubt have their own preferences. But, in the end, everyone is right in their choice of a favorite date varietal, no one is wrong. With dates as with so many other things in life, it’s all a matter of taste.