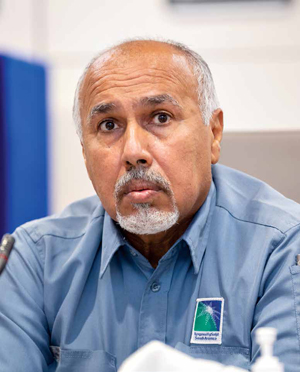 Hussain M. Al Haleimi will be retiring from Aramco after more than 44 years with the company. His most recent position has been manager of Gas Drilling & Workover Operations.

Al Haleimi said that one of the highlights of his career was planning and executing the Red Sea deep-water exploration program. “It was exciting because this was the first time that Aramco had gotten involved in such operations,” Al Haleimi said. “Despite the technical challenges of operating in deep water, the project started on time and was very successful without any operational glitches. This project presented a number of complications for the project team to face and resolve, most prominently the unique large bore well design. But as a team, we met these challenges and resolved them together.”

In retirement, Al Haleimi plans to spend more time with his grandchildren, explore Saudi Arabia, read history, and contribute his time and experience as a volunteer in his community in Mubarraz, al-Hasa.