Mini Get Together Before NED69ers 7th Reunion 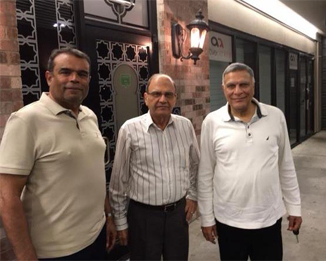 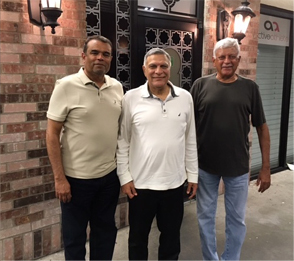 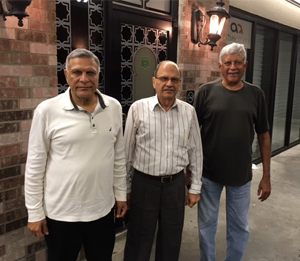 NED69ers 7th Reunion is to be held in Houston, Texas November 10-12, 2017. Engr. Jawaid Saeedi, Engr. Abdul Majid Adam, and Engr. Moin Khan are the organizers of the event. Engr. Kersi Edulji NED69er Mechanical is on a visit to the USA to meet his daughter who lives in Houston.

Kersi met Engr. Moin Khan two years back when a party was arranged at Engr. Omar Vowda place in the honor of Moin Khan. He met the other two after a long time.

The dinner was arranged at Agha’s Restaurant a very famous Pakistani Joint. The dinner was delicious and all of them enjoyed and discussed the good sweet memories of NED Good Old Days and the wonderful time they spent together during their stay in the college for four years. They discussed the details of last five decades and about their achievements and the families.

Engr. Jawaid Saeedi gave a complete program of the NED69ers 7th Reunion to Engr. Kersi Edulji and the detail is as follows:

A Texas style BBQ dinner will be at the Bear Creek National Park on November 10, 2017 5 PM-9 PM adjacent to the Golf Course. We highly recommend that all participants should attend this event. This will be an opportunity in a typical outdoor setting to mingle and catch up.

The main event on November 11, 2017, 7 PM -1AM, will be held at the Grand Texas Ballroom located in the Embassy Suites, Energy Corridor on 1-10 {Katy Fwy}. Dinner will be served by a popular Pakistani Restaurant. A program is being put together by our spouses for this main event. This program will also include Karaoke/Singer from Houston.

After the briefing by Engr. Jawaid Saeedi, Engr. Kersi Edulji departed with the promise to attend the NED69ers 7th Reunion and to meet all the other class mates at the function.