Petra: A Wonder to Behold 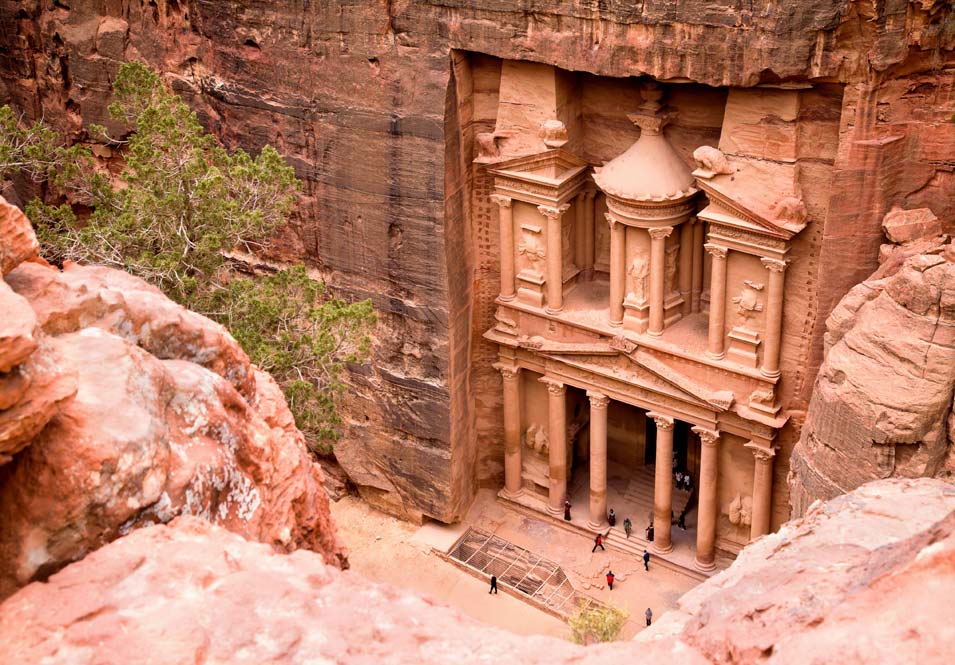 Over the years, legions of ExPats living in the Kingdom and working for Aramco have taken advantage of their close proximity to the famous historical sites of the Middle East to explore their wonders in person. AramcoExPats publisher Vicci Turner was one of them. During her 25 years in Saudi, she parlayed the strategic location of the KSA into visits to Egypt, Jordan, Syria, Iraq, all the Gulf States, and even Yemen. Two of her favorite places were (and remain) the pyramids of Egypt and Petra in Jordan, both of which can be found on lists of the Seven Wonders of the World—one ancient, one new.

A recent AXP article dwelt in part on the oldest of that pair, the Great Pyramid of Giza in Egypt, one of the Seven Wonders of the Ancient World. Its six companion wonders of antiquity were: in Mesopotamia, the Hanging Gardens of Babylon; in Greece, the Statue of Zeus at Olympia and the Colossus of Rhodes; in Turkey, the Mausoleum at Halicarnassus (present-day Bodrum) and the Temple of Artemis at Ephesus; in Egypt, the Lighthouse of Alexandria. Of those seven, only the Great Pyramid remains standing, although scuba-diving French archaeologists located submerged remains of the Alexandria lighthouse in 1994. Spurred on by that discovery, plans are underway to create an underwater museum there.

Deciding that one visible Wonder was not enough and that a new list of seven was needed, in 2007 a Swiss company calling itself the New 7 Wonders Foundation held an online contest in which it claims 100 million people voted—if true, making it the largest opinion survey in history. The seven new wonders chosen by popular vote were: in China, the Great Wall; in India, the Taj Mahal; in Italy, the Colosseum of Rome; in Brazil, the Christ the Redeemer statue in Rio de Janeiro; in México, Chichén Itzá; in Peru, Machu Picchu; in Jordan, Petra. The Great Pyramid was named an eighth honorary member of that list as the last remaining Wonder of the original septet.

Petra has often been described as having once been a “Lost City,” but that is a misnomer. It was never lost to the Bedouin tribes that called it home, nor to Greek Christian families living in the area. It was simply far removed from popular transportation routes, tucked away in a region considered unsafe for outsiders to visit. As a consequence, its location remained a closely-guarded secret for centuries until 1812. In August of that year, a daring Swiss scholar named Johann Ludwig Burckhardt, speaking flawless Arabic, reached Petra disguised as an Arab pilgrim from India, thus becoming the first European in hundreds of years to view this magical place.

“Knowing that my intended way led through a diversity of Bedouin tribes,” he later wrote, “I thought it advisable to equip myself in the simplest manner. I assumed the most common Bedouin dress, took no baggage with me, and mounted a mare that was not likely to excite the cupidity of the Arabs.”

Drawing near to Petra’s rumored site, Burckhardt hired a local Bedouin to be his guide, paying him “with a pair of old horseshoes” to lead him the final few miles to his ultimate destination.

“I regret that I am not able to give a very complete account,” he wrote of his visit to Petra, “but I knew well the character of the people around me; I was without protection in the midst of a desert where no traveller had ever before been seen; and a close examination of these works...would have excited suspicions that I was a magician in search of treasure … Future travellers may visit the spot under the protection of an armed force; the inhabitants will become more accustomed to the researches of strangers; and the antiquities of Wady Mousa (Petra) will then be found to rank amongst the most curious remains of ancient art.”

Modern-day visitors to Petra face none of the safety concerns that bedeviled Burckhardt two centuries ago. They can easily travel there in air-conditioned comfort without armed guards, and the local Bedouins will gladly welcome them. Be aware, however, should you decide to visit Jordan and Petra yourself, that any guides you hire will expect to be paid in currency or by credit card, not with old horseshoes. Times have changed.

Whether seeing Petra for the first time or the fifth, people are always astonished by the “most curious remains of ancient art” Burckhardt refers to, and by the other-worldly grandeur of the surrounding land. Writing in 1953, travel journalist Rose Macaulay described the experience well:

“If ever a dead city held romance it is Petra … hewn out of ruddy rock in the midst of a mountain wilderness, sumptuous in ornament and savage in environs, poised in wildness like a great carved opal glowing in a desert, this lost caravan city staggers the most experienced traveller.”

Historians trace the earliest signs of human life at the site back to the Neolithic age over 10,000 years ago, thousands of years before the generally recognized “dawn of civilization” in the nearby Fertile Crescent. No one knows for certain exactly where the Arab tribe we know as the Nabateans came from. What we do know for certain is that, sometime around 400 BCE, they settled into the region where present-day Petra is located. Among their greatest accomplishments, they developed a system of writing said to be the basis of written Arabic.

Petra’s establishment as a recognizable urban center dates from their arrival, but its true rise to wealth and power dates from the first century BCE when the Nabataean Empire was established and Petra was made its capital. They named it Rekem. Only after the Romans annexed the city in the late first century CE did it come to be known by its Greek name, Petra, meaning “rock.”

Petra derived its riches in good part from its strategic location astride one of the most important trade routes of the ancient world stretching from the Mediterranean basin all the way to China. A steady stream of caravans laden mostly with frankincense and myrrh from the southern Arabian Peninsula and, to a lesser degree with spices, silks, and other goods from India, Sri Lanka, and eastern lands beyond, passed directly through Petra on their way to the Mediterranean world of Egypt and Rome and Greece. Caravans moved as well in the opposite direction, bearing primarily silver and gold, but also carpets and tapestries, furs and coral, wine and papyrus, and other items of value needed to pay for more aromatics, spices, silks, and such. Trade on the ancient incense, spice, and silk routes, it is sometimes forgotten, was a two-way street. 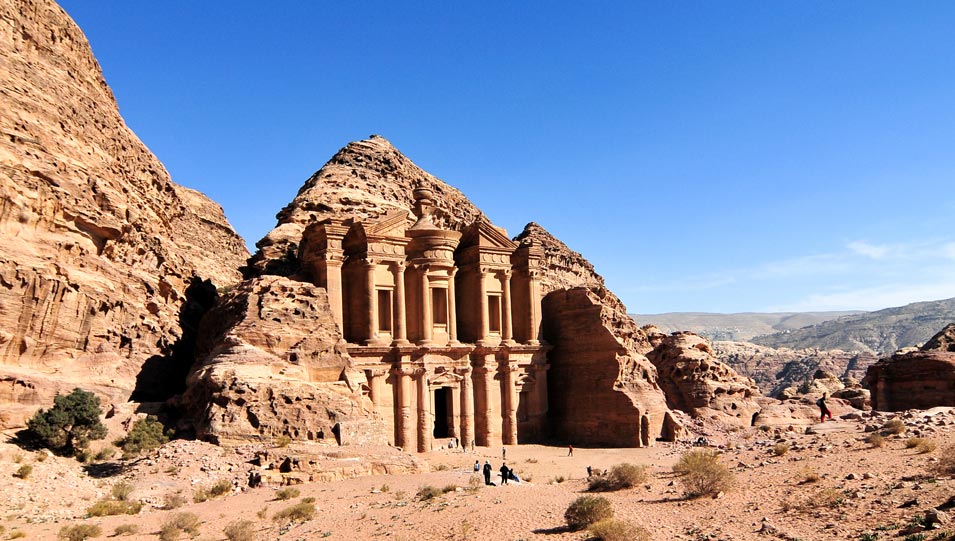 Over a span of 400 years, operating from Petra, the Nabataeans dominated the primary trade routes linking Rome and the Far East, carefully guarding the identity of their sources of goods. Essential to their success was the system of water collection and distribution they created which freed them and the trading caravans they served from dependence on scattered desert oases and the fiercely independent tribes that controlled them. At Petra, the Nabataeans carved a 300-foot long tunnel to divert water from flash floods into two large cisterns—also carved out of solid rock. That water was then used to supply the city’s needs.

With advancements in ship design and the invention of better navigation tools, the importance of sea routes to trade waxed and the predominance of the Arabian land routes waned. Inexorably, gradually, the Nabataean Empire faded away, becoming the stuff of legends. Finally, a full millennium after its birth, Petra was abandoned and, in time, the legend of the “Lost City” emerged. Then, in 1812, along came Johann Burckhardt, and the city was reborn, eventually developing into what it is today, one of the new Seven Wonders of the World.

With over 600 tombs and other imposing buildings carved out of solid rock, Petra offers a dizzying array of choices to visitors. If you had a month to spare, you might manage to see all of them, if you really tried. If you only have a day or two, here are seven highly-touted Wonders of Petra to consider focusing on:

The recent discovery of the Great Temple Complex, previously hidden from view, using data collected from satellite images and archaeological survey drones, has raised hopes in Jordan that Petra might someday attract tourists from afar in numbers commensurate with its splendor and fame.

Vicci Turner remembers a lesser-known aspect of Petra from her first visit there in the mid-’70s:

“Conditions back then were very different from what they are today,” she said recently. “They were much more primitive. Bedouins were still living in the caves as they used to hundreds of years ago. And the tourist facilities were pretty basic, almost non-existent, actually, compared to what they are now.”

The Bedouins Vicci remembers were members of the B’doul tribe, “B’Doul” meaning “switched” in Arabic. Tradition holds that they got their name when they switched their faith from paganism to Islam in the 7th century CE. Tribal members consider themselves direct descendants of the ancient Nabataeans who originally founded Petra over 2,000 years ago.

In the mid-1980s, Petra was named a UNESCO World Heritage site, and the B’doul were compelled to leave their cave life behind and relocate to modern housing in the newly-built settlement of Umm Sayhoun, a short distance away. Today, many of them serve as tourist guides, while others regale visitors with displays of local color, including music, handicrafts, and donkey and camel rides. Tourism now provides the B’doul with their primary source of livelihood, a considerable change from the semi-nomadic life they lived for centuries before modernity and hordes of tourists caught up with them.

“Another thing I remember about Petra,” Vicci continued, “was how enormous the carved-out buildings were. The Treasury was especially impressive inside. Unfortunately, it’s closed to visitors now. All those buildings were empty, which made them seem even bigger than they actually were. And the narrow canyon leading into Petra was just amazing. It was easy to see how the people there were able to block passage to the spice and incense caravans and collect tolls from them.”

Another annuitant of note who once visited Petra is Bert Seal, the beloved photographer known for his splendid images capturing the history of Aramco and its people. AXP is pleased to feature Bert’s gorgeous photographs of Petra as accompaniments to this article. They explain better than these words ever could the magic of Petra, one of the new Seven Wonders of the World.

The feature article of AXP’s e-newsletter of 3 October 2018 concerned the kellek, a raft supported by inflated animal skins commonly used at one time throughout the Middle East, but especially on the Tigris and Euphrates rivers in Mesopotamia. Coincidentally, the kellek had a modest part to play in the drama that was Petra and the ancient spice trade.

For four centuries, the Nabataeans had a choke hold on caravans bearing treasures across the Peninsula. Inevitably, some traders, rebelling at having to pay for passage, tried to find ways around that land-based monopoly and turned to the sea.

At the far southern tip of the Arabian Peninsula, smugglers employed rafts supported by inflated animal skins—i.e., kelleks—to surreptitiously ferry contraband goods (primarily frankincense and myrrh) to ships anchored offshore. Those ships then bore their precious cargoes northward up the Red Sea to ports in Egypt, thereby circumventing Petra and its sister Nabataean cities along the traditional overland caravan route. In time, the ocean routes won that battle, and Petra faded from history, for many centuries the light of southern Arabia.