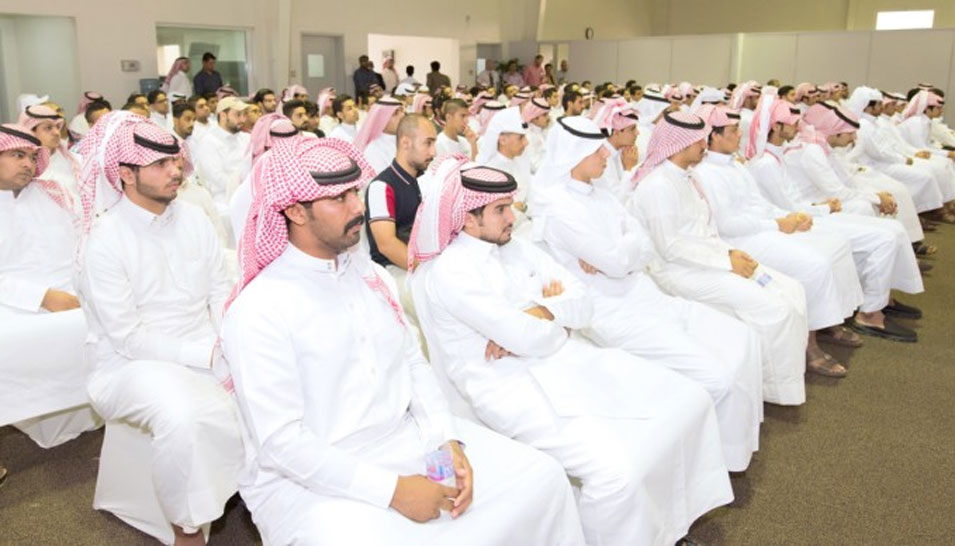 With human capital at the center of Saudi Vision 2030, along with the development of a generation of qualified young Saudis in all industries being key to the Kingdom’s success, the Saudi Arabia Drilling Academy (SADA) was opened recently in Abqaiq.

A Vision for the Future

The impetus of the academy came from Saudi Arabia’s need to train and develop young local talent. SADA will help provide young Saudis with the skills required for the drilling and exploration industry and by 2020, more than 30,000 are needed to work in the industry.

Situated in Abqaiq, the key project is a source of pride for Saudi Aramco’s Local Workforce Development Department, which has collaborated with all involved agencies on a project.

Dawood M. Al-Dawood, vice president of Northern Area Oil Operations (NAOO) and chairman of the board of trustees of SADA, emphasized the initiative’s alignment with Saudi Vision 2030 and how it is designed to help the Kingdom shift from an industrial to a knowledge-based economy. By training young Saudis and increasing Saudization in the Kingdom’s energy sector, the project will increase competitiveness and foster development in the Kingdom. 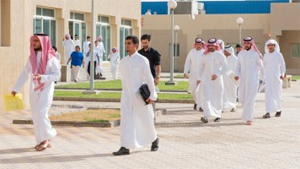 Young Saudis move to the next stop on an
orientation tour on their first day at the
recently opened Saudi Arabia Drilling
Academy in Abqaiq.

The origins of the project go back to mid-2015 with an initiative from Al-Dawood, then vice president of Drilling and Workover (D&WO), who met with the executive directors of the 34 companies to persuade them into accepting the idea of the project based on the following:

Earlier that same year, D&WO had initiated the concept for the academy through a Kingdomwide feasibility study, which found that over the next 20 years, approximately 90,000 Saudis will need to be trained to meet the industry’s growth plans for the Kingdom.

Training in the academy, which helps secondary education graduates and in-service technical talents sharpen their skills and supports them in apprenticeship, is twofold. The first is academic training for almost a year where students learn mathematics, English, and other academic subjects in the classroom. The second is training workshops on simulators and rigs.

First of a Kind

As the academy kicked off with its first orientation session at the end of September, the SADA hall was packed with students from all across the Kingdom — all with great hope and enthusiasm.

Abdullah A. Al Ghabbani, manager of the Local Workforce Development Department, welcomed the trainees and touched upon some of the aspects of the program that are designed to provide job opportunities for young Saudis in the vital exploration, drilling, and workover industry.

Noting that the program runs for 18 months of academic and practical training, Al Ghabbani said: “This will qualify graduates to work as drilling professionals. It is the first project of its kind in the world, as it is the result of a partnership among 34 companies operating in the Kingdom, including Saudi Aramco.” 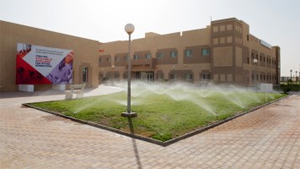 The Saudi Arabia Drilling Academy, which
is provided with logistic support by Saudi
Aramco, will develop a generation of
qualified young Saudis in the field of drilling.

SADA is just one institute that is playing a part in providing training opportunities and crucial skills to young Saudis. The National Industrial Training Institute (NITI), which opened a new branch in al-Hasa in 2015, has a capacity of 2,500 students and has helped provide high-level skills to young Saudis since opening.

Also, the Maharat training centers, a consortium of Jazan’s training and employment contractors in Jazan refinery and terminals, have been training young Saudis in specialized construction skills, with 5,000 young Saudis expected to participate in the program. And the Inspection Technology and Quality Assurance National Institute in Ju’aymah, which was also launched in 2015, is designed to train young Saudis in new professions.

Saudi Aramco continues to take part in projects such as these that provide sustainable support for the local economy.

On the day of SADA’s first orientation, a father from Dammam left his work and house to travel a distance not short for a man in his 60s — all to witness the first professional step for his son, Abdulaziz Al-Braykit. “I liked the idea very much,” he said. “I encouraged my son to join the academy.”

Ali Al-Edinan came from the far southern frontier of Najran with his luggage and dreams of a successful career. “After I reviewed the benefits, whether in terms of training or work later on, I came. I liked it a lot. When I was approached for an interview in al-Hasa I did the best in my power to be convincing. Fortunately, I was selected, and here I am today, resolute to succeed.”

Nasir Al-Sab’an from al-Khobar, decided he couldn’t miss the opportunity of joining the academy. “I have read a lot about drilling and workover job opportunities in the Kingdom. This led me to seriously consider becoming a professional in this field for the income and job security it provides,” said Al-Sab’an.

The three young Saudis are just a sample of what will follow as thousands who are trained follow in pursuit of realizing their own dreams of becoming valuable members of the workforce while helping the Kingdom realize Saudi Vision 2030.