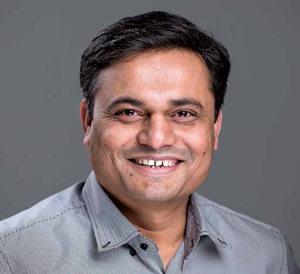 Houston — Hasmukh Patel, a senior lab scientist, at the Aramco Americas Houston Research Center has won an award from the International Association of Advanced Materials (IAAM) for making significant contributions to the field of materials science.

Patel, who holds 16 patents and has published more than 50 scientific papers, has worked in India, Italy, Korea, Britain, and the United States.

He arrived in Chicago in 2015 as a postdoctoral fellow assisting Professor of Chemistry Fraser Stoddart in the lab at Northwestern University. Stoddart won the Nobel Prize in Chemistry in 2016.

It was there that he developed expertise with so-called smart polymers whose properties change depending on their environment.“It was a big privilege to work in Stoddart’s lab,” said Patel. In 2017, he joined Aramco because it “is a great place to do fundamental and applied research.”

At Aramco, Patel works on smart materials that better distribute stresses at the subatomic level in wellbore cement jobs. This is directly relevant to the energy industry, and his work also looks at ways to improve drilling fluid so that it is more effective at high temperatures.

His work is addressing major challenges for drilling, and EXPEC ARC in Dhahran is taking it to the field for testing.

“We are proud of this well-deserved recognition by Dr. Patel for his contributions to Materials Science literature,” said Ghaithan A. Muntasheri, director of Research & Development at Aramco Americas.

After Patel earned his Ph.D. in 2009 in India, he traveled around the world to get experience in different subjects.

He worked on polymer nanocomposites in Italy, then spent four years at the Korea Institute of Science and Technology to work on porous materials for carbon capture, then worked at University College London on hybrid membranes for gas separation and fuel cell application.

“This coveted global recognition is awarded to individuals who have exemplified enduring research leadership and a vision for the field of advanced materials science, engineering, and technology,” IAAM said of Patel’s award.

The IAAM awards ceremony this year was virtual. Patel delivered a presentation by video called “Stimuli Response of Polymers for Oil and Gas Industries.”

In addition to his journal articles, Patel authored a book in 2014 on nanoclays, contributed a chapter to another book, and received a prestigious fellowship from the Indian government in 2016.

Patel’s award is one of 25 that have been received by scientists at the U.S. research centers so far this year, with more likely.