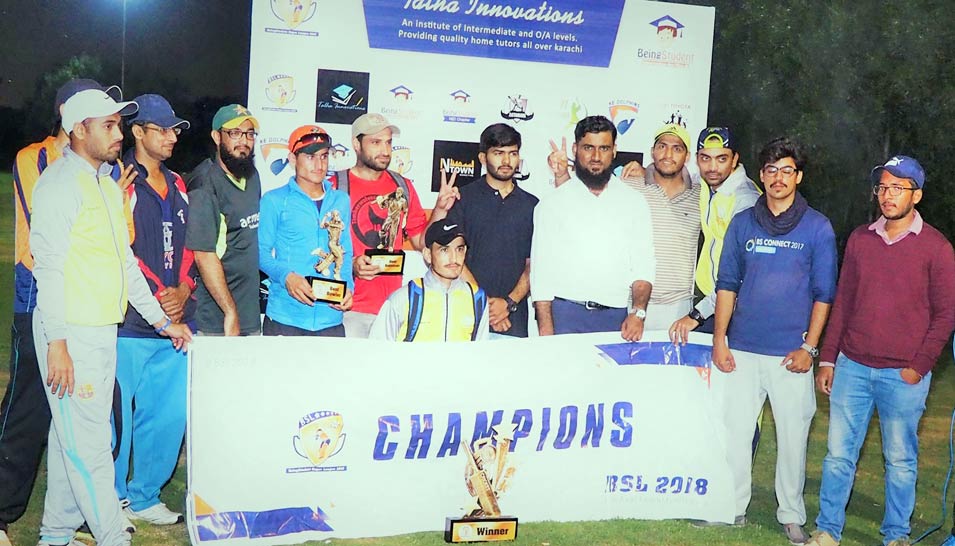 Group photograph of the Champions of BSL 2018 - “Sherwani Sports”

About the Organizer – Being Student

Being Student is a multidisciplinary organization dedicated to bridging the gap between industry and the students. Being Student promotes learning and encourages cooperation between professionals and individuals seeking opportunities in the industries.

About the Event – Being Student Super League 2018

BSL 2018 is an initiative by Being Student to establish cordial relationship among students, professionals and institutions by coming together on a single platform. Thus provide students with the team work skills necessary to survive in the real world, through healthy sporting and socializing activities. This year, we had something bigger in plan! With 24 teams, divided in 8 groups of 3 teams each, cricket lovers from all backgrounds and levels will compete to life the winning trophy. The BSL 2018 winning trophy!

Scheduled on Saturday and Sunday, February 17 & 18, 2018, BSL – 2018 was played in two different venues. There were two league matches per side. 24 team were divided in 8 groups and 1 team from each group qualified for the Quarter Finals which will were played on the same day. The semi-finals and the final were played on February 24, 2018 and the prize distribution held on the same day.

The tournament structure, groups and team details can be found on click the button below:

The day arrived for which all the teams were champing at the bit. The first day of BSL 2018, 17th February was full of enthusiastic and relentless matches. All the teams played with zeal and zest. 24 teams were competing for the BSL 2018 trophy. On the 1st day matches were played in 2 different venues namely SNH ground and Taha ground.

Matches started around 9 p.m. All the teams of groups E, F, G & H put their hearts into the competition and left no stone unturned to beat their opponent. Teams KT Sports, Vintagers XI, Rotaract Royal 11 and Zistanians stood their ground and dominated the pitch as a result of which they qualified for the quarter finals by eliminating rest of the teams. These matches were nail biting which increased the excitement among the audience. The excitement level reached fever pitch when BSXI player’s stepped foot on to the pitch to collide with KT Sports, their arrival caused a stir in the audience and loud roaring and cheering voices for BSXI team could be heard from the long distance. The tournament was able to grab the attention of many as the event was even covered by DAWN NEWS.

In the first quarter final KT Sports brought the house down by defeating Vintagers XI by a margin of 8 wickets, while in the second quarter final Rotaract Royal 11 put up a fight against Zistanians but were overcome by 5 wickets.

After a day full of quality cricket, all the matches came to an end around 4 p.m. But the excitement level still could be seen on the winner’s faces.

After an exhilarating first day of BSL 2018, on 18th February the remaining teams from groups A, B, C & D were pumped to get into action and find out who would qualify for the semifinals. As planned, the matches commenced at 09:00 and all teams battled out in a trial to be the best.

As the qualifying matches drew to a close, teams Sherwani Sports, North Kings, KE Dolphins and UK Strikersdifferentiated themselves as victors from the rest and went on to compete in the third and fourth quarter final.

The moment of Honor!

Ex MNA, Mr. Rehan Hashmi was able to grace the tournament with his presence and he appreciated the efforts of Being Student Management for organizing BSL 2018. In the 3rd quarter final match, team Sherwani Sports turned out to be a huge crowd pleaser as they were successfully able to crush team North Kings by a margin of 31 runs. Meanwhile, in the 4th quarter final match the crowd really enjoyed watching team KE Dolphins beat team UK Strikers by 5 wickets.

It was evident from their performance that all these 4 teams deserved to be in the semifinal of BSL 2018. We eagerly waited for the arrival of 24th February 2018 as on that day in SNH ground at 4p.m. we would find out who the winner of the Tape Ball Cricket Tournament would be.

24th February was the most anticipated day of BSL 2018 - Tape Ball Cricket Tournament. The last day of BSL 2018 - Tape Ball Cricket Tournament arrived and everyone was eager to know who would be the winner of this competitive venture. SNH Cricket Stadium Karachi was the venue where the semifinals and final took place. The teams that qualified for BSL 2018 Semi Finals; KT Sports, Zistanians, Sherwani Sports & KE Dolphins set the ground on fire with their astonishing cricket skills. All the semifinalist teams sweated blood to get into finals. However KT Sports &Sherwani Sports showed supremacy and subjugated team Zistanians and KT Dolphins thus managing to be the finalist of BSL 2018 Cricket Tournament.

At last the moment arrived when both the final teams set their foot on the ground to snatch BSL 2018 trophy. The proof of effective sportsmanship, leadership and strategic gaming was clearly seen among the teams. Every second of the match was worth watching; as the last ball of this Tape ball tournament was drawn, Sherwani Sports was declared to be the winners, beating KT Sports in the final of BSL 2018 by 20 runs. It was through their sheer skill and perseverance that theysnatched the victory from the jaws of defeat.

The winner team was awarded with the BSL 2018 Cricket tournament trophy and the prize money of Rs. 20,000/-. As promised, runner up team, KT Sports, was not left empty handed and awarded with Rs. 10,000/-. Moreover, award of MAN OF THE MATCH was given to Mr. Usama, Captain of KT Sports as his performance was acclaimed by everyone throughout the tournament. This was followed by the award of BEST BOWLER which was given to Mr. Malinga, from Sherwani Sports as he showed astonishing spells while Mr. Ashraf, from Sherwani Sports grabbed the BEST BATSMAN award.

It was a great privilege for BSL 2018 - Tape Ball Cricket Tournament for having TALHA INNOVATIONS as educational partner. At last, BSL 2018 came to an end and surely this vying full event will be remembered by people.

All in all, BSL 2018 was a great success, it got attractions from many sports enthusiasts, sponsors and media as well. It served our purpose of promoting learning and encourages cooperation between professionals and individuals seeking opportunities in the industries. Next year we have bigger and better plans, a tournament open for 48 teams and a dedicated tournament for females as well to promote women empowerment.

We would like to be listen to everyone’s feedback, suggestions and positive response. We would also love to get your support of any kind or sponsorship to continue our efforts and serving the student community with pride. Let us know if you have any query for us at [email protected]