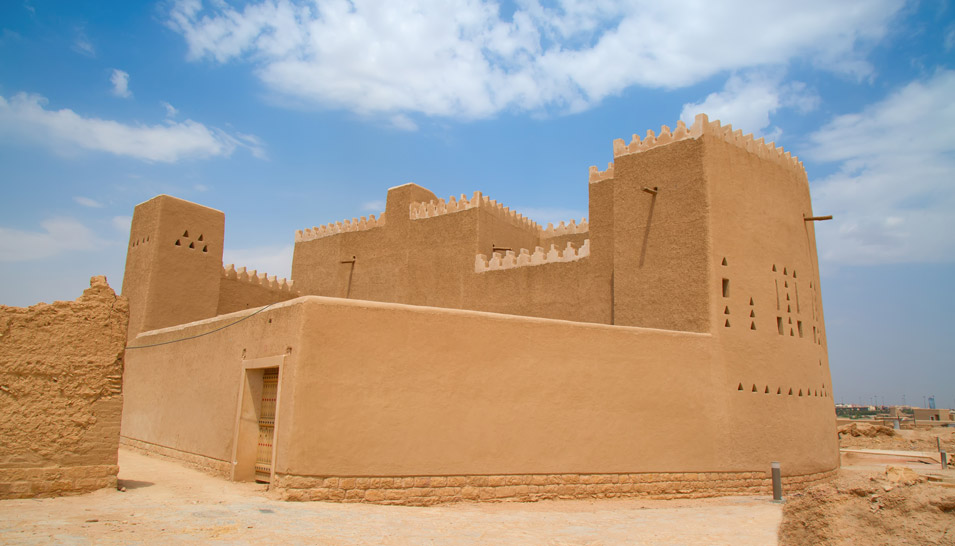 The Saud dynasty and the Kingdom of Saudi Arabia claim as their common birthplace ad-Dir’iyah, the sprawling fortified complex of mud brick/adobe mosques, palaces, battlements, and various other clay-colored structures located 12 miles (20 kilometers) west of Riyadh along the banks of the Wadi Hanifa. Ad-Dir’iyah is notable as well as the birthplace of Sheikh Mohammed bin Abdul Wahhab, the Arabian religious reformer and father of Wahhābīsm.

In 2010, the at-Turaif District of ad-Dir’iyah was recognized by UNESCO for inscription as a World Heritage Site. The following year, a huge restoration project was launched, with the goal of turning ad-Dir’iyah into a world-class tourist destination as part of a broader program designed to attract foreign visitors to the Kingdom. A key goal of the overall program is for Saudi Arabia to take control of the narrative of its history in order to better recast its image to the world at large, emphasizing the immense and positive contributions Saudis have made to the history of the Middle East and, by extension, to the history of the world.

UNESCO had this to say about ad-Dir’iyah when announcing its inscription as a WHS:

“This property was the first capital of the Saudi Dynasty, in the heart of the Arabian Peninsula, north-west of Riyadh. Founded in the 15th century, it bears witness to the Najdi architectural style, which is specific to the centre of the Arabian peninsula. In the 18th and early 19th century, its political and religious role increased, and the citadel at at-Turaif became the centre of the temporal power of the House of Saud and the spread of the Salafiyya reform inside the Muslim religion. The property includes the remains of many palaces and an urban ensemble built on the edge of the ad-Dir’iyah oasis.”

“Criterion (iv): The citadel of at-Turaif is representative of a diversified and fortified urban ensemble within an oasis. It comprises many palaces and is an outstanding example of the Najdi architectural and decorative style characteristic of the centre of the Arabian Peninsula. It bears witness to a building method that is well adapted to its environment, to the use of adobe in major palatial complexes, along with a remarkable sense of geometrical decoration.”

“Criterion (v): The site of at-Turaif District in ad-Dir’iyah illustrates a significant phase in the human settlement of the central Arabian plateau, when in the mid-18th century Ad-Dir’iyah became the capital of an independent Arab State and an important religious centre. At-Turaif District in Ad-Dir’iyah is an outstanding example of traditional human settlement in a desert environment.”

“Criterion (vi): The at-Turaif District was the first historic centre with a unifying power in the Arabian Peninsula. Its influence was greatly strengthened by the teachings of Sheikh Mohammad Bin Abdul Wahhab, a great reformer of Sunni Islam who lived, preached and died in the city. After his enduring alliance with the Saudi Dynasty, in the middle of the 18th century, it is from ad-Dir’iyah that the message of Salafiyya spread throughout the Arabian Peninsula and the Muslim world.”

It was at ad-Dir’iyah where the first Saudi dynasty was founded in the 15th century and where, three centuries later, the first Saudi state was established. When an invading army of Ottoman Turks and Egyptians overthrew the first Saudi state in 1815, they destroyed the fortifications at ad-Dir’iyah with a withering bombardment of canon fire, leveling much of the complex. Today, those crumbled ruins are in the process of being meticulously restored, bringing back to life an essential chapter in the history of the Kingdom. Thanks to that effort, although a large portion of the area remains closed to the public, there’s already much to see at ad-Dir’iyah, and soon there will be even more to enjoy as restoration efforts advance.

Already, the area surrounding the fortress has taken on the appearance of a modern desert oasis, drawing Saudi families from neighboring Riyadh looking for an escape from the bustle of the city. There you will find palm trees, parks, and an array of attractive restaurants and coffee shops. All of this lies in the very shadow of newly-reconstructed edifices reflective of the amazing history of ad-Dir’iyah.

One of the primary focuses of the restoration effort is known as the Al-Diriyah Gate, currently being restored according to a Royal Order establishing the Al-Diriyah Gate Renovation Commission. Under the Commission’s leadership, the Diriyah Gate is being developed into the largest Islamic Museum in the Middle East. The mud brick city includes the King Salman Library, traditional souks, modern malls, a wide range of restaurants, and fully-equipped gathering places for groups of every size. The Diriyah Gate complex encompasses an area exceeding 15 million square feet (1.5 million square meters). 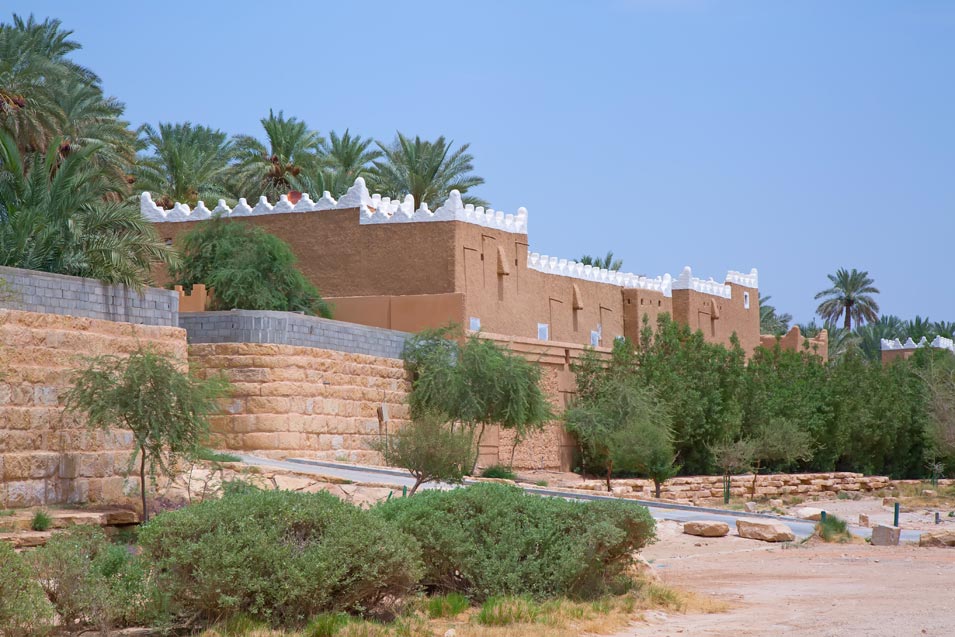 “The gate opens up the history of Saudi Arabia and its cultural dimension,” according to a 22 July 2017 article in the Saudi Gazette. “It has a unique location overlooking the banks of Wadi Hanifa and is an extension of Al-Bijeiri District from the east. It will have a number of historical, educational and cultural facilities, most important of which is the Islamic Museum.

“Its squares and parks are linked with a network of walkways having a distinctive architectural and environmental design. The project will attract a lot of investments and it will enhance private sector participation.”

Opening historical sites like ad-Dir’iyah to foreign visitors is an integral part of a larger national project being supported by the Crown Prince meant to transform the Kingdom’s economy beyond its dependency on oil, thereby making it more diverse. The hope is to simultaneously boost domestic travel while encouraging overseas visitors to come and explore the wonders of the Kingdom. Over a recent five-year period, Saudi Arabia welcomed roughly 25,000 foreign visitors annually as they explored the archaeological, historical, architectural, and natural treasures of the Arabian Peninsula. As the Kingdom rebuilds ad-Dir’iyah, brick by brick, it hopes to build up its tourism, visitor by visitor. The overarching aim of this initiative is to attract a combined total of over one million domestic and foreign tourists.

The ad-Dir’iyah complex is comprised of significant archaeological monuments dating back to the Thamud and Madâin Sâlih’ epochs and even as far back as the Stone Age. The Kingdom has visions of someday making the treasures of ad-Dir’iyah among the most important visiting places in the Middle East.

Saudi efforts to promote global awareness of ad-Dir’iyah received a tremendous boost in December 2018 with the running of the first-ever Formula E single-seater, all-electric street racing event in the Middle East. The competition, sponsored by ABB, featured a new generation of Formula E electric cars of astonishing speed and agility. The “Saudia” Ad Diriyah E-Prix kicked off the fifth season of ABB FIA Formula E racing.

The 2.5-kilometer circuit followed a winding course through the ancient quarter of ad-Dir’iyah and around the town walls and included 21 corners to challenge the drivers’ skills. In December 2019 a second Ad Diriyah E-Prix will launch Season 6 of ABB FIA Formula E racing. To Formula racing fans among our readers with an interest in Saudi history we say: Start making your plans today!

Entertainment at ad-Dir’iyah was not limited to the race track. A series of concerts were held as well featuring performances by music icons Enrique Iglesias, David Guetta, Black Eyed Peas, Amr Diab, Jason Derulo, One Republic, and others. The ad-Dir’iyah event showcased ABB FIA Formula E’s concerted effort to revolutionize the race-going experience for fans.

“CEO and founder, Alejandro Agag, wanted to create a racing series that allowed fans to be closer to the action than traditional motorsport series permitted,” Arab News reported in December 2018. “Since the inaugural race in Beijing in 2014, FIA and the Formula E team have continually shaped the series with a focus on spectators. This has resulted in some exciting concepts, with the newest addition bearing a distinct resemblance to the Mario Kart video game. As the only event in the world that allows fans to play a role in deciding the outcome of the race, Formula E features a function called Fanboost.

“Fans vote online for their favorite driver through the Fanboost system, via Twitter or the Formula E app. The three drivers who receive the most votes get a significant burst of electricity that becomes available in a five-second window during the second half of the race. This way, fans could help drivers in a crucial moment where that extra speed is the difference between overtaking and lagging behind. The so-called ‘halo” roll bar over the driver’s head will flash green when Fanboost is activated.”

Through innovative efforts such as the renovations at ad-Dir’iyah and the sponsoring of an ePrix race, the Saudi leadership is greatly expanding global awareness of the unique history and allure of the Kingdom.

Ad-Diriyah was the third stop on our continuing tour of a notable septet of destinations AXP has selected as its “Seven Wonders of Arabia.” Previously we visited Madâin Sâlih’ and Historic Jeddah. Our next stop will be at the Jabel Umm Sinman hill range at Jubbah for a visit to the rock art of the Hail Region. See you there!