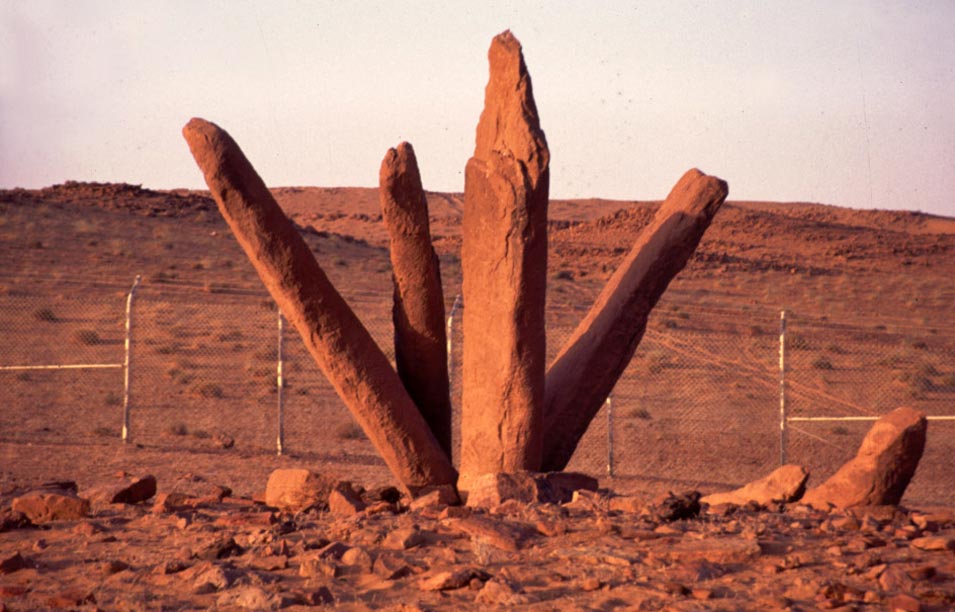 Last year a series was introduced in these pages identifying what we termed “The Seven Wonders of Arabia.” The time has come to announce our choice for the seventh and final member of that select group. With hundreds of worthy candidates to choose from, that decision was far from easy, but at last it has been made, and the winner is the standing stones of Ar Rajajil near Sakakah, Al-Jawf Province on the edge of the Nafud desert in the northwest corner of the Kingdom bordering Jordan. Sometimes called the Stonehenge of Saudi Arabia, Ar Rajajil poses countless mysteries to us moderns, few of which have been answered as yet to anyone’s satisfaction. In part this is because, until 50 or so years ago, archaeologically speaking, Saudi Arabia was among the least-explored countries in the world, this despite its being home to over 4,000 archaeologically significant sites, some 1,500 examples of rock art among them.

People have been pondering the history and meaning of England’s Stonehenge for hundreds if not thousands of years; meanwhile, in comparison, people have been trying to unravel the secrets of Ar Rajajil for just over half a century. That leaves a lot of catching up to do, and the Saudi Commission for Tourism and National Heritage (SCTNH) has been leading a broad and determined effort to close knowledge gaps like this in its ancient heritage in cooperation with archaeological teams from within the Kingdom and from around the world, including, in the case of Ar Rajajil, a highly-skilled team from Germany.

Ancient stone structures home to unsolved mysteries can be found throughout the Kingdom and in other countries in the region such as Syria and Jordan and Yemen. In the Kingdom alone 16 stone circles or henges have been identified, with Ar Rajajil acknowledged as the most significant among them. Sitting athwart ancient trade routes that linked the Levant and Egypt with southern Arabia since time immemorial, Ar Rajajil reminds us of vanished cultures from the Chalcolithic (Copper) and Bronze ages four to five thousand years ago and of the dramatically different climate conditions that obtained on the Peninsula back then.

During the period in which the standing stones of Ar Rajajil were erected, the region enjoyed considerably higher levels of precipitation than what is seen today and, as a result, was home to significant expanses of grasslands sufficient to support the raising of domesticated animals and to notable stretches of arable lands ideal for growing crops. In the millennia since, groundwater levels have been lowered significantly and land suitable for growing crops reduced to a narrow coastal belt, leaving us with the arid, inhospitable desertscapes commonly associated with Arabia today. The standing stones of Ar Rajajil remind us that it was not always so, serving as a tantalizing hint of a prehistoric cultural heritage of Arabia long shrouded in the mists of time or buried under drifting, ever-shifting sands.

As of today, those stones pose more questions than we can answer: What was their purpose? What motivated the ancients to erect them? What was their meaning? Local legend holds that they represent a lost tribe punished by God for its unfaithfulness. Researchers today have confirmed the site’s use as a burial ground, but the mystery behind them extends well beyond that. Much speculation about their ultimate purpose centers on matters of astronomy. Viewed from ground level, at first glance the stones comprising the Ar Rajajil complex make little sense; aerial photographs shot from high above, on the other hand, clearly reveal their north-south, east-west alignment. The stone pillars originally faced east toward the rising sun. Through the centuries, many have toppled over, and those that remain stand in inclined angles forced upon them by the steady pressure of prevailing winds.

There are 54 groupings of stones at Ar Rajajil. Distributed among them are 30 pillars measuring nearly 10 feet in height and 30 inches across and weighing five or so tons apiece. Additionally, there are hundreds of smaller stones, some as small as 30 inches high. All of the stones were brought to the site from some unknown distant location, cut and shaped into the rectangular shapes seen today. Yet no one can say exactly where they came from or how that shaping was done, for no metal tools capable of supporting such handiwork have been found at Ar Rajajil. Even more perplexing, the stones appear to date from a time when no metal tools of any kind capable of cutting such stones are thought to have existed in the region. With England’s Stonehenge, it’s well established where its massive bluestone monoliths originated from. Not so the pillars and stones of Ar Rajajil. The unsolved mysteries they evoke are endless, which makes it all that more important that they be preserved to allow future generations to view and study them and, perhaps, to unravel more of their mysteries. Human encroachment and vandalism in recent years has taken a toll on the standing stones of Ar Rajajil. The Saudi government, together with local interests, is mounting an effort to preserve and protect this important cultural heritage.

Archaeologists have confirmed that Ar Rajajil was used as a burial site, but other explanations for its creation abound. There are popular legends based on fear and superstition, and other functional explanations attributing the stones’ purpose to mundane matters such as enclosures for animals, or secure gathering places for the local populace, or landmarks for travelers on the trade routes intersecting at the site. 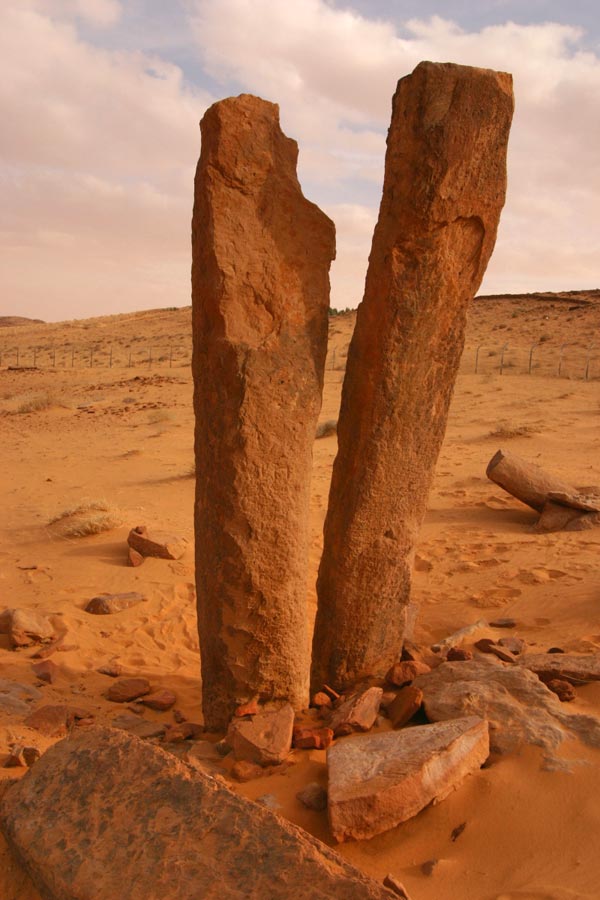 Much has been made of their possible astronomical functions. Many argue that they served some sort of religious or ritual function, but one can only speculate as to the details. The general consensus overall is, the standing stones are conclusive evidence of a now-lost mixed agrarian society/shepherd culture made possible by more favorable climate conditions than those of today. The creation of an organized stone complex such as Ar Rajajil is impossible to imagine emanating from a nomadic Bedouin society. It owes its existence both to climate and to its fortuitous location in close proximity to the Wadi Sirhan Basis and the oasis-based economies it fostered.

What is regarded as a funerary complex at Ar Rajajil (translated as “The Men”) was arrayed along an east-west axis and featured burial sites marked by monolithic blocks set into the ground side by side in a manner roughly analogous to what is seen in modern cemeteries. Over 50 burial sites have been identified, most of them trench tombs, a few of them more elaborate funerary chambers, all of them dating from the 5th or 6th millennium BCE. Many of the stones bear inscriptions in ancient Thamudic script.

Considerable research has been done trying to identify the standing stones of Ar Rajajil as a sort of ancient astronomical observatory. Supporters of this interpretation claim that no religious purpose has been established for them, arguing instead that they were placed in the manner they were in order to gauge the movement of the planets and the stars. For an agrarian society such as what existed there 5,000 years ago, being able to determine the cycles of the seasons was critically important to survival. In truth, nobody can say for sure exactly why the standing stones are there. It is commonly accepted that megalithic sites such as Ar Rajajil were built during a period of agricultural revolution when agricultural activities became paramount and such knowledge was essential.

Scholars who argue in favor of an astronomical interpretation of the standing stones of Ar Rajajil freely admit they have no documented proof of their theories. They base their claims instead on extrapolations and inferences made from careful scientific observations and measurements. They have been able to establish north-south, east-west alignments, but they have been unable thus far to establish how ancient dwellers of the Arabian Peninsula were able to accomplish the same feat. Today we can point to Polaris, the North Star, confident that we are pointing to within one degree of true north. Five thousand years ago, however, the Pole Star was not Polaris but Thuban, which lay at the time within one-tenth of a degree of true north. But did the people who built Ar Rajajil recognize Thuban as being true north? Who can say? As an act of faith, astronomers say “Yes!” and assure us that agriculture, as it was practiced 5,000 years ago in the region, supports their hypothesis that the standing stones found there served as a natural observatory generating information essential to their community’s continued existence.

“I remember first visiting Ar Rajajil in the 1990’s with the Head of Archaeology for the region of Al Jauf. Here on this windswept rocky plain, your perspective turns to ancient times, when survival revolved around observation of the cosmos, particularly the rising and the setting of the sun and the moon. While nobody knows for sure why these standing stones were placed here so precisely, they bring to mind Celtic Ireland, where the Bonane stone circles and the great megalithic passage tomb at Newgrange all date from a similar period, older than the Pyramids of Giza. One cannot help but ponder at how people on different continents were erecting similar stone monuments. At the Winter Solstice, the rising sun at Newgrange floods the long passage with light, signaling the beginning of a new year. In time, hopefully, we will learn more about the exact purpose of Ar Rajajil. But for now, it is simply amazing to walk among these stones that were placed here, so very carefully, 5,000 years ago.”

A primary ancient trade route passing through Ar Rajajil connects it directly with Madâin Sâlih, previously anointed by AXP as the first of our Seven Wonders of Arabia. Madâin Sâlih and Ar Rajajil conveniently serve then as bookends for this series. Both bear witness to the amazing places and endless mysteries that are essential components of the story of Saudi Arabia from its earliest origins to the present day. Five of the seven sites selected by AXP—Madâin Sâlih, Historic Jeddah, the At-Turaif District in ad-Dir’iyah, the Rock Art of the Ha’il Region, and al-Hasa oasis—have formally been inscribed by UNESCO as World Heritage Sites, while a sixth, Rijal Alma, is currently on the Tentative List for consideration by UNESCO for WHS status. Ar Rajajil has yet to achieve either honor, but its day of recognition will surely come in time.

By limiting our number of wonders to seven, we have left out scores of other sites in the Kingdom worthy of mention. Most notably, we have left off our list the magnificent mosques of Madinah and Makkah as well as other historically significant sites closely associated with Islam. This was not done to diminish their importance, but rather to allow the alternative sites chosen by us to shine in their own light.

The Saudi government is currently mounting a major effort to promote a better understanding of the Kingdom in the world at large by encouraging foreign visitors to come to Arabia and experience for themselves the wonders of the people, the culture, and the historical heritage. A visit to any of the Seven Wonders, be it Ar Rajajil or some other one, would be an essential part of any itinerary. To anyone considering a visit, know that Arabia will welcome you with open arms.