A Kingdom First: ‘Born a King’ Premieres at Ithra

Dhahran — The first Saudi movie to premier in the country, “Born a King,” was screened at the King Abdulaziz Center for World Culture (Ithra) during Saudi National Day celebrations. Based on the life of King Faisal ibn ‘Abd Al-‘Aziz Al Sa’ud, the movie recounts the tale of a then 13-year old prince, who was sent on a high-stakes diplomatic mission to Britain. 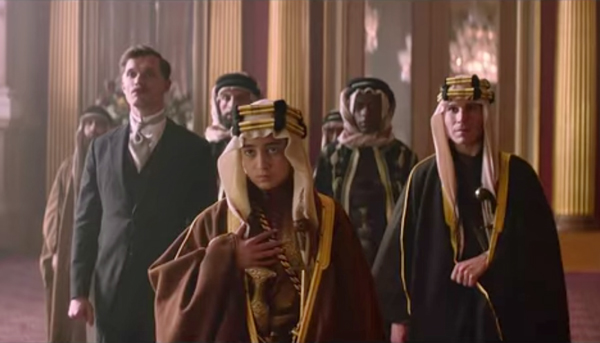 Andre Vincente Gomez, an Oscar-winning Spanish producer with over 130 Spanish movies to his credit, said he was inspired by the coming of age story and the challenges the young prince faced in his mission. The movie was produced in English, but is dubbed in Arabic for local audiences.

“It was a great experience, working in Saudi Arabia with young people,” said Gomez, saying he expects the film industry to develop significantly in the coming decade in the Kingdom. “We will witness a leader in the Arab world.”

Todd Nims, a former Saudi Aramco employee and co-producer of “Born a King,” helped with the casting and development of the Saudi portion of the movie.

“Casting was a challenge,” said Nims, noting that more than 1,000 people showed up to the auditions. “The biggest challenge was to find someone who resembled King ‘Abd Al-‘Aziz.”

The team also faced several challenges in sourcing props, such as artillery.

Four years in the making, the $12 million film was shot between seven weeks in London and three weeks in Riyadh.

Having watched the premiere at his former hometown, Nims was excited to see the audiences’ reaction to the movie. “I was watching for people’s reactions. They were glued to the screen and you could see their emotions — at the happy and sad moments on screen. That’s always a good sign,” Nims said.

Abdulwahid, a 32-year-old Saudi Aramco brat and Saudi actor based in Hollywood, who got the role of King ‘Abd Al-‘Aziz after going through several rounds of auditions in Los Angeles, said he was blessed and honored to be part of the film.

“It was rewarding to see the audiences’ reaction to the movie, and coming back to watch the premier at Saudi Aramco, it feels like life has come full circle.”

Others who played a role in the film production included Saudi Aramco Facilities Planning Department employee Bader A. Samari who worked with Ray Loriga on the script. “Born a King” is currently running in local cinemas.