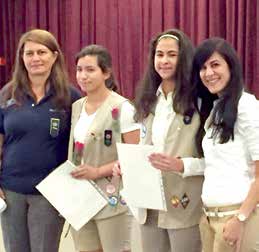 Dhahran — The Girl Scouts mission statement —“Girl Scouts builds girls of courage, confidence and character who make the world a better place” — is fitting for Cadettes Girl Scouts Talyah Alnatour, Lina Al-Shaikh, Laura Solano Florez, and Dina Haikal from Troops 15 and 80, who have recently completed their Silver Award. A Silver Award project is the highest honor for Cadette Girl Scouts. Scouts who undertake a Silver Award project choose a community service project and then devote at least 50 service hours into the research, planning, execution, documentation of their work, and how it impacts the community. Before undertaking a Silver Award project, Girl Scouts must complete many stringent requirements, and some would have earned their Bronze Awards as Juniors.

For their project, Taylah and Lina from Troop 15 recognized the need for diverse and nutritious recipes for fast-paced lives. They created a digital cookbook of recipes that can be made in less than 45 minutes. “We chose to use a website because t’s environmentally friendly, paperless, and can reach a wide range of audiences all over the world,: Talyah and Lina Said. Talyah designed, laid out, and launched the website, which contains many recipes at http://scrumptiouslyswift.weebly.com.

For Dina from Troop 80, her project sought to sustain a charitable project that was started by her late grandmother. She planned, organized, and conducted a charity drive to collect clothes, toys, and supplies for children in Amman, Jordan. “My project was focused on collecting donations to support children of distressed families,” Dina said. “I was very happy with my project as it was a continuation of my grandmother’s approach in donating my clothes when I was little.” She was able to ship six large boxes of various donated items.

A Library for Orphans

Also from Troop 80, Laura’s project provided a library for an orphanage in her home country of Colombia. She collected books from donors, sending some she collected in Dhahran to Colombia and selling others to buy new books, shelves, tables, and chairs for the orphanage to have its own library. “I believe that education is the only way these orphans, who are at a disadvantage, can choose their future and hopefully better it,” said Laura. After more than 50 hours of work and planning, Laura has made a difference in the orphans’ lives and is proud to have achieved her goal.

In addition to these honors, 46 other girls participated in a Bridging Ceremony, which marked their accomplishments and their graduation into older and higher levels of scouting.

The ceremony emphasizes the continuity of the Girl Scouts program throughout all age groups. It represents a girl’s growth and development from one stage of life to another. Preparation for Bridging involves activities with a troop at the next level that introduces the girls to what lies ahead. The 46 Girl Scouts who bridged included the following:

During a Bridging Ceremony, a Girl Scout literally crosses a small wooden bridge, moving from one level of scouting to the next level. Once the girl crosses over, she is received by a scout of the next level, who gives her the Girl Scout handshake.