George Warren Blakslee was born July 1921 in Pennsylvania and earned a BA in geology from Penn State University. In 1943, he entered the Army Air Corps and was commission bombardier in 1944. After getting his wings, George's first assignment was to train two squadrons of Chinese cadets at Kirkland Air Base, Albuquerque, New Mexico. Later, he trained for combat in B-17's and B-29's.

Okay, I'll try again. Thought a picture of my folks might help jog some of the older memories out there. Mom and Dad are Helen and Barney McKeegan who spent about 10 years in Dhahran. My Dad arrived in the field in 1944 and my Mom and I and my two sisters arrived in 1947.

Vic and TJ Friedmann and son, Alexander, joined Aramco in 1974. Vic, a geophysicist in the Exploration Department, and family were initially assigned to the Croydon, England office in October 1974. Alexander attended the local school there.

When I first got turned on to your new site, I thought it looked like another site for mostly the ones who came to the field after 1960, and so, thought it might be another waste of my "Valuable" time.

Marvin and Ruth Stark Retired in 1995

My wife Ruth and I retired from Saudi Aramco in 1995. Ruth worked for Aramco as a British nurse starting in 1974. I joined the company in 1975 and we were married in 1980. I was an engineer from California and had the good fortune to work on all 5 of Saudi Aramco sulfur plants at Shedgum, Uthmaniyah, Berri, Ras Tanura, and Jubail.

Think You Know Everything?

Think You Know Everything? 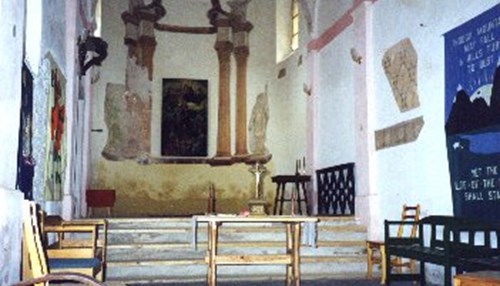 We do not have Bed and Breakfast guests constantly, a good thing, since we devote so much time to each person or group. Our main business is the woodshop and then the farm.

I taught at the Dhahran schools from Dec. '79 through August '86. During that time I taught music and chorus in grades K-5, first at the Central School and later at the Hills School. I was also involved in the community chorus, community band (percussion), ANHA, and the square and round dance clubs.

Former Aramcons, Edgar and Brenda Dewar lived and worked in Arabia from October 1981 until July 1986. Edgar worked for Aramco as a chemical engineer, corrosion specialist, out of Udhailiyah and Mubarraz. Brenda taught in the Udhailiyah Schools for one year.

Linwood Thompson graduated from the University of Massachusetts, Amherst and was commissioned a 2nd Lieutenant, United States Air Force on May 25, 2002. In June, Woody will report for active duty at Randolph Air Force Base in San Antonio, Texas where he will start navigator training.

What To Do On A "Rainy Day" in Dhahran?

It doesn’t rain very much in Dhahran does it! However, as summer approaches some days are just too hot to go out and if you’re anything like me you really appreciate a day in the house, just as you do on a rainy day at home. But, what to do if you really don’t feel like reading, watching television, or sorting out that cupboard you promised yourself you’d do weeks ago?

First, the Cirque du Soleil is not a circus as the name implies.

As of Monday of this week, Aramco ExPats has been reborn in its sixth iteration.